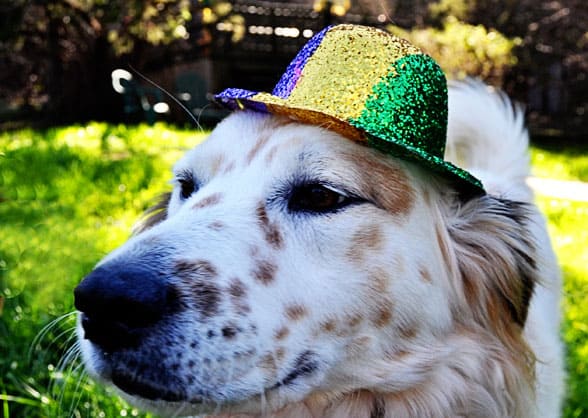 Get to know other dog lovers!

Mardi Gras just around the corner! Pet owners can bring a little of The Big Easy home to their dog friends by attending one of the numerous Mardi Gras events that are dog-friendly. These festivals will provide a mixture of frivolity and philanthropy.

These are just a few of many fetes where you can enjoy the party with your four-legged companion and do good deeds for cats and dogs in dire need. If there’s a Mardi Gras pet parade for a paws cause not listed, let us know in the comment section below!

Carnegie Carnival Canines on Parade
From the intersection of Second Avenue & Johnston Street to Lee Street at Decatur
February 26, 2022

You can expect a party filled with doggone fun in downtown Decatur, where a multitude of partying dogs will be dressed in clothing for a good cause!

Track my Paws will benefit the proceeds from the event which will include Sir Bow Wow’s crowning and Lady Barkss-a-Lot.

Dogs can take part in a “Pawjama Party”-themed parade and help dogs and cats who are dreaming of a better tomorrow!  Proceeds from this event benefit The Haven for Animals.

Along with promenading pooches in festive apparel, the day of play (which this year will be celebrated with a “Pirates of Oyster City” theme) will also include tunes from local bands and vendor booths brimming with pet-related souvenirs.

A happening with heart, the parade will benefit the Forgotten Coast of Florida’s animals in need.

Celebrating a quarter of a century in 2022, pups parading in purple, gold and green garb will help to generate ‘green’ for good causes!

Over the years the event has raised more than $650,000, which has been distributed to a variety of neighborhood charities, including DeLand’s art community, families in need and humane pet centers.

Part of the annual St. Andrews Mardi Gras, our buddies who bark can enjoy a taste of The Big Easy as they promenade in a parade.

Partying pups will be pulled in festooned mini-floats, golf carts and wagons as their people toss throws to a canine-loving crowd.

Along with floats and fashion forward Fidos, the largest fundraising event for PAWS of NE Louisiana each year will also include children’s games and vendor booths.

Celebrating its 23rd year, this event (complete with a costume contest) funds for the Capital Animal Welfare Society’s spay/neuter program.

Costume-clad canines can enjoy a tribute to Carnival and help a paws case in the process, raising people’s spirits while raising funds for several area animal assistance groups.

Helping homeless dogs and cats live happily ever after, the theme of this year’s pup party is “A Fairy Tail,” and will include a costume contest, a concert, family-friendly activities, vendors and pet adoptions.  Proceeds benefit animal welfare organizations participating in the event.

Festive Fidos will file down the street in style during this annual demonstration of dogged devotion to Mardi Gras which helps the non-profit Krewe des Chiens aid animal assistance organizations in the Acadiana area throughout the year.

Mystic Krewe of Barkus
Pre-pawty and post-pawty parade at Armstrong Park, parade through the Vieux Carre in New Orleans
February 20, 2022

At New Orleans’ only salute to Spots regal Rovers can revel during a Barkingham Palace: Barkus is Going for The Crown-themed parade, all to raise funds for various animal welfare charities.

Tailwaggers can tap into their inner Rob Lowchen, Collie Ringwald, Andrew MuttCarthy or another member of the Brat Pack as Mardi Paws celebrates ’80s Pawp Culture!  Costume clad canines can vie for a coveted prize at this Covington do– a glitter “poop” trophy!  Proceeds from the event will help both kids and canines.

Billed as the world’s largest costumed pet parade, party animals will promenade for a paws cause, with each registration fee to participate donated to Open Door Animal Sanctuary. The most fashion forward Fidos will be chosen to be members of the Court of the Mystical Krewe of Barkus and can attend the Coronation Pageant to witness the crowning of the day’s top dogs, the King and Queen of Barkus.

Part of the Asbury Park Mardi Gras, pups in festival apparel will summon the spirit of New Orleans during a parade that will raise funds for Wag On Inn Rescue.

Our four-legged family members will walk proudly alongside us as we shine a light on the Young-Williams Animal Center.  Party with a higher purpose will include costume contests and noms from a variety food trucks. There will also be the opportunity to shop among a wide range of vendor stalls.

Krewe of Barkus & Meoux Parade
21st Street and Harborside at Pier One in Galveston
Feb. 27, 2022

The festivities begin with a costume contest for canines, followed by a pet parade. Galveston Island humane Society will host the fundraiser. The funds will go towards providing pets with spay/neuter, emergency and vaccination services, as well as microchip clinics.

Enjoy a 4,500 strong Mardi Gras crowd at a gathering influenced the philanthropic Mystic Krewe of Barkus New Orleans, which throws a lifeline to abandoned dogs as its human participants throws to this canine-loving crowd.

This year’s theme is “A Walk Down Memory Lane,” with each participant picking their favorite pet parade theme from the past 20 years as their pup’s costume inspiration.