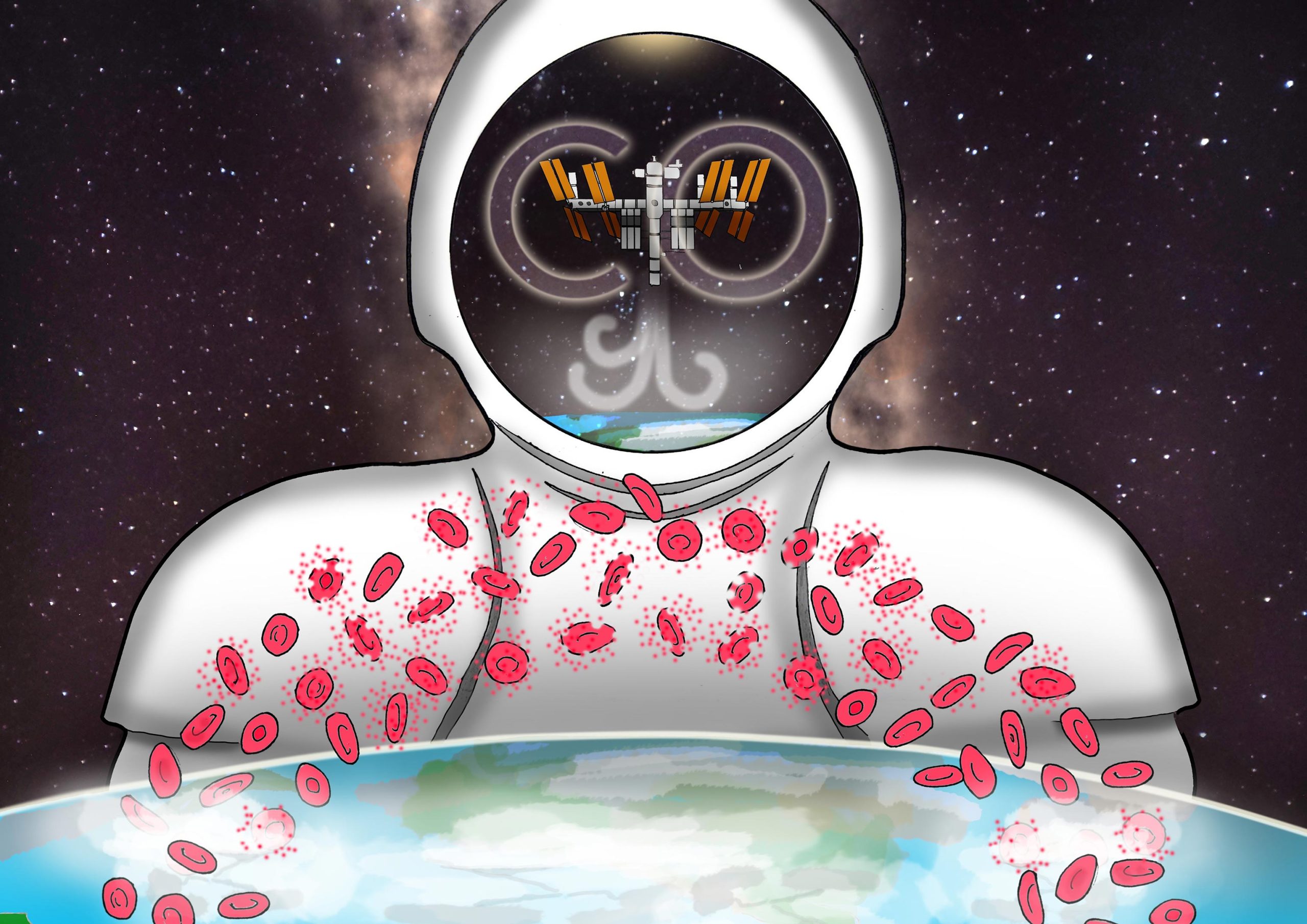 A world-first study has revealed how space travel can cause lower red blood cell counts, known as space anemia. Analysis of 14 astronauts showed their bodies destroyed 54 percent more red blood cells in space than they normally would on Earth, according to a study published in Nature Medicine.

“Space anemia has consistently been reported when astronauts returned to Earth since the first space missions, but we didn’t know why,” said lead author Dr. Guy Trudel, a rehabilitation physician and researcher at The Ottawa Hospital and professor at the University of Ottawa. “Our study shows that upon arriving in space, more red blood cells are destroyed, and this continues for the entire duration of the astronaut’s mission.” Before this study, space anemia was thought to be a quick adaptation to fluids shifting into the astronaut’s upper body when they first arrived in space. Astronauts lose 10 percent of the liquid in their blood vessels this way. It was thought astronauts rapidly destroyed 10 percent of their red blood cells to restore the balance, and that red blood cell control was back to normal after 10 days in space. Dr. Trudel’s team made this discovery thanks to techniques and methods they developed to accurately measure red blood cell destruction. These methods were then adapted to collect samples aboard the International Space Station. At Dr. Trudel’s lab at the University of Ottawa, they were able to precisely measure the tiny amounts of carbon monoxide in the breath samples from astronauts. One molecule of carbon monoxide is produced every time one molecule of heme, the deep-red pigment in red blood cells, is destroyed.

While the team didn’t measure red blood cell production directly, they assume the astronauts generated extra red blood cells to compensate for the cells they destroyed. Otherwise, the astronauts would end up with severe anemia, and would have had major health problems in space.

“Thankfully, having fewer red blood cells in space isn’t a problem when your body is weightless,” said Dr. Trudel. “But when landing on Earth and potentially on other planets or moons, anemia affecting your energy, endurance, and strength can threaten mission objectives. The effects of anemia are only felt once you land, and must deal with gravity again.” In this study, five out of 13 astronauts were clinically anemic when they landed —one of the 14 astronauts did not have blood drawn on landing. The researchers saw that space-related anemia was reversible, with red blood cells levels progressively returning to normal three to four months after returning to Earth.

Interestingly, the team repeated the same measurements one year after astronauts returned to Earth, and found that red blood cell destruction was still 30 percent above preflight levels. These results suggest that structural changes may have happened to the astronaut while they were in space that changed red blood cell control for up to a year after long-duration space missions.

The discovery that space travel increases red blood cell destruction has several implications. First, it supports screening astronauts or space tourists for existing blood or health conditions that are affected by anemia. Second, a recent study by Dr. Trudel’s team found that the longer the space mission, the worse the anemia, which could impact long missions to the Moon and Astronaut Jeff Williams collects a breath sample for the MARROW experiment on board the International Space Station. Credit: NASA

These findings could also be applied to life on Earth. As a rehabilitation physician, most of Dr. Trudel’s patients are anemic after being very ill for a long time with limited mobility, and anemia hinders their ability to exercise and recover. Bedrest has been shown to cause anemia, but how it does this is unknown. Dr. Trudel thinks the mechanism may be like space anemia. His team will investigate this hypothesis during future bedrest studies done on Earth.

“If we can find out exactly what’s causing this anemia, then there is a potential to treat it or prevent it, both for astronauts and for patients here on Earth,” said Dr. Trudel.

These are the first published results from MARROW, a made-in-Ottawa experiment looking at bone marrow health and blood production in space. The project is funded by the Canadian Space Agency and led by Dr. Trudel.

“This is the best description we have of red blood cell control in space and after return to Earth,” said Dr. Trudel. “These findings are spectacular, considering these measurements had never been made before and we had no idea if we were going to find anything. We were surprised and rewarded for our curiosity.”

For more information about the MARROW project, see this story about Canadian Space Agency astronaut Dr. David Saint-Jacques’ participation in the study, and article in the University of Ottawa’s Tabaret.

Funding: This study was funded by the Canadian Space Agency. The Ottawa Hospital Research Institute and the University of Ottawa Faculty of Medicine are also supporting this research through the Blueprint Translational Research Group’s Excelerator program.