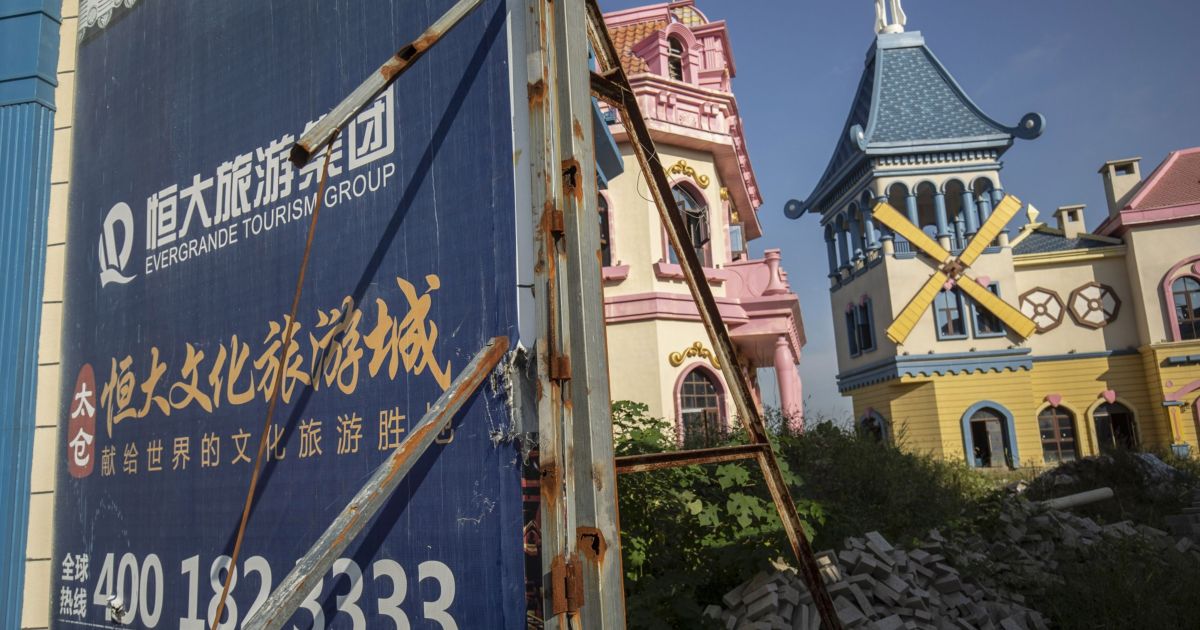 China’s cash-strapped Evergrande Group has left its offshore bondholders guessing whether it would pay interest on a bond coupon due on Wednesday despite agreeing to settle debt with a Chinese bank in a $1.5bn stake divestment deal.

With liabilities of $305bn, Evergrande has sparked concerns its woes could spread through China’s financial system and reverberate around the world – a worry that has eased with the Chinese central bank promising to protect homebuyer interest.

Evergrande said in an exchange filing that it would sell a 9.99 billion yuan ($1.5bn) stake it owns in Shengjing Bank Co Ltd to a state-owned asset management company.

The bank, one of Evergrande’s main lenders, demanded all net proceeds from the sale go towards settling the developer’s debts with Shengjing. As of the first half last year, the bank had 7 billion yuan ($1.08bn) in loans to Evergrande, according to a report by brokerage CCB International, citing news reports.

The move underscores how Evergrande, once China’s top-selling developer and now expected to be one of the largest ever restructurings in the country, is prioritising domestic creditors over offshore bondholders. It also highlights the role state-owned enterprises may play in Evergrande’s denouement.

The company is due on Wednesday to make a $47.5m bond interest payment on its 9.5 percent March 2024 dollar bond.

The company missed a payment deadline on a dollar bond last week, a day after its main property business in China said it had privately negotiated with onshore bondholders to settle a separate coupon payment on a yuan-denominated bond.

Evergrande’s silence on its offshore payment obligations has left global investors wondering if they will have to swallow large losses when 30-day grace periods end for coupon payments due on September 23 and September 29.

A spokesperson for Evergrande did not immediately respond to Reuters’ request for comment.

“We are in the wait-and-see phase at the moment. The creditors are organising themselves and people are trying to figure out how this falling knife might be caught,” said an adviser hired by one of the offshore Evergrande bondholders.

“They failed to pay last week, I think they will probably fail to pay this one. That doesn’t mean necessarily they’re not going to pay … they’ve got the 30-day grace period,” said the adviser, who declined to be named due to sensitivity of the issue.

Once the face of China’s frenzied building boom, Evergrande has now become the face of a crackdown on developers’ debts that has spurred volatility in global markets and left large and small investors sweating their exposure.

In the weeks since, some global investors have shifted their focus to political wrangling in Washington over the US debt ceiling and a rise in Treasury yields that has pressured stocks.

Any negative surprise by Evergrande could give stock market bears more ammunition.

In another sign of how grim its situation is, Evergrande’s electric car unit has stopped providing free lunches and other at-work meals to research centre staff, Bloomberg News reported citing people familiar with the matter.

Separately, some staff, including those working at the carmaker’s production sites in Shanghai and Guangzhou, have been asked to take until the end of next month off without pay, extending a holiday that is meant to wrap up on October 7, Bloomberg reported.

Beijing is prodding government-owned firms and state-backed property developers such as China Vanke Co Ltd to buy some of Evergrande’s assets, people with knowledge of the matter told Reuters.

Authorities are hoping that asset purchases will ward off or at least mitigate any social unrest that could occur if Evergrande were to suffer a messy collapse, they said, declining to be identified due to the sensitivity of the matter.

On Monday, China’s central bank promised to protect consumers exposed to the housing market, without mentioning Evergrande in a statement posted to its website, and injected more cash into the banking system.

Those moves have boosted investor sentiment towards Chinese property stocks in the last couple of days, with Evergrande stock rising as much as 17 percent on Wednesday. The stock was up around 11 percent in the afternoon trade.