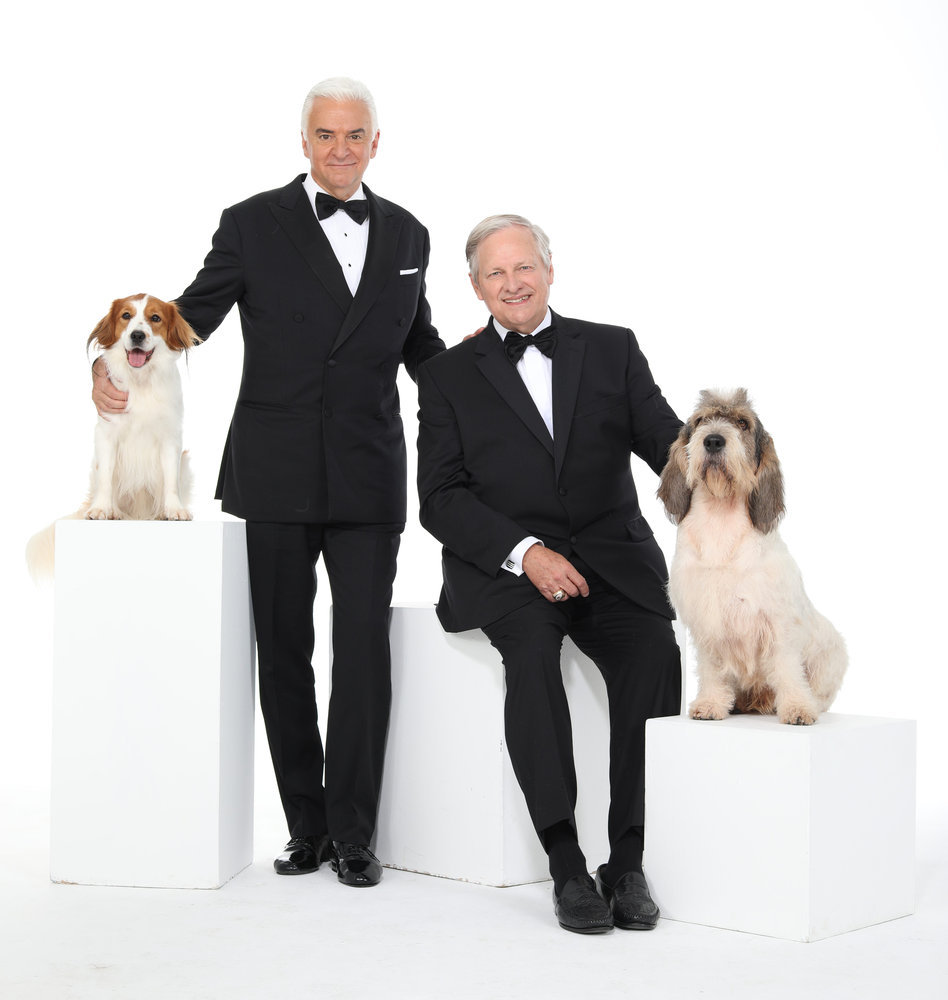 It’s that most wonderful time of the year once again: the National Dog Show is on the horizon!

As we’ve written many times, we are unabashedly in love with mixed breed dogs. The more mixed, the better.

But we love all dogs, mixed and purebreds. And we like to take every opportunity to learn about all kinds of dogs, from big to little, fluffy to the face only a dog mother could love.

Learning all we can about the animals that share, not only our hearts and our home, but also our career, we always watch The National Dog Show Presented by Purina®. Aired on NBC after the Macy’s Thanksgiving Day Parade, the show, of course, features top purebred dogs—but it also showcases therapy dogs.

Last week I had the opportunity to talk with National Dog Show hosts David Frei and John O’Hurley to learn more about this show that ranks as a holiday favorite for families across the country.

John O’Hurley is the versatile TV personality who played catalogue king J. Peterman on Seinfeld and was the Ultimate Champion in the first edition of Dancing with The Stars.  He’s authored three books, hosted Family Feud and mastered several roles on Broadway but declares the National Dog Show as his favorite day of the year.

David Frei is America’s foremost expert on all things canine as former host 27 years of the Westminster Kennel Club Dog Show on USA Network and as expert analyst for the National Dog Show Presented by Purina–and a former top-tier pro tennis player.

Where to Watch the National Dog Show

Thanksgiving is a time to count our blessing, to share a meal with those who mean the most to us—and to watch the National Dog Show.

NBC: Scheduled on NBC on Thanksgiving from noon to 2 p.m. in all time zones immediately following “Macy’s Thanksgiving Day Parade”, this holiday tradition celebrates man’s best friend with the broadcast of the open bench Kennel Club of Philadelphia show.

Online and Streaming: The broadcast can be viewed on NBCSports.com and on the NBC Sports app at 12 p.m. ET on Thanksgiving.

Every year the show features new dog breeds. A new American Kennel Club-sanctioned breed will be introduced to a national audience in this year’s competition, bringing the total recognized breeds to 209. The 2021 show will introduce the Biewer Terrier (above) in the Toy Group.

This elegant and athletic toy terrier is one whose only purpose in life is to love and be loved. They maintain a charming, whimsical attitude and are dedicated, loyal family members and friendly with strangers. Since the first “National Dog Show” broadcast in 2002, 50 new breeds have been introduced to the event.

“John and I are doing homework on the new breeds every year,” says Frei. “They aren’t actually new breeds but breeds from other countries.”

“I think one of the important things that we tell people is the history of a breed and what it was originally bred to do. If you know what they were bred originally to do you have some idea about their temperament and their personality,” points out Frei. “So I want you to think about it in those terms, in addition to just smiling and being entertained by the different breeds and varieties.”

The discussion between the co-hosts about the breeds’ personalities is one that Frei hopes will help dog lovers when they select their next furry family member—and better understand the “best in show” dog that shares the couch with the viewer.

Frei explains that he hopes his breed discussions throughout the show will help people understand “why [dogs are] wired certain ways and might herd your children around in the living room if they’re a herding dog, for example. I hope that we can share that knowledge with people and have them look at their dog and say, ‘now that explains why you do that so now I understand that a little better.’ Or maybe they’re thinking about getting a dog, and they’ll think about those things and how they fit their lifestyle and family. I hope they take that away, too.”

Inspired by “Best in Show” Movie

Did you know that The National Dog Show was inspired by the movie Best in Show?

But what do members of the dog show world think about the popular parody? “Imitation is the sincerest form of flattery and I think we are very parodiable, to coin a word, because there is such a sense of strictness and written rules and written specifications. It lends itself to parody,” explains O’Hurley.

“We are very grateful to be have that beginning of our show. John Miller took the movie home about 20 years ago and watched it twice over the weekend, came back on Monday morning and said ‘I know what we’re going to do with that two-hour slot after the parade, we’re going to do a dog show,’” recalls O’Hurley “They about laughed him out of the office but, sure enough, by the end of the day he had the National Dog Show from the Kennel Club of Philadelphia, and he had Purina on as a sponsor. The next day he called me and I picked up the phone in LA and I said hello and he said ‘woof woof’ and that’s how it all started.”

Frei is also pleased with the now-classic comedy. “We all love the movie. People in the dog show world, we were all concerned that the parody would be a little rough on us. But they made of the people, they made the sport but they did not make fun of the dogs. That would have been the end of it for me, for all of us I think, if the dogs had been the target of parody.

“We have great time with it. We started a year after the movie came out and that movie endures. I think John would say the same thing. Everybody, every year asks us about the movie Best in Show. We think we’ve given that movie great life. We are happy to be in that family.”

Another aspect of the National Dog Show that many viewers may not be familiar with is the National Dog Show’s Therapy Dog Ambassador Team, featuring dogs that make hospital visits, helping to create a home environment for people undergoing care. Frei points out, “People respond to the therapy dogs. They may say they’re not able to show their dog but that they could do therapy work with their dogs.”

“Therapy dogs don’t have to be purebred dogs–any dog with the right temperament and the right person” can be a therapy dog, notes Frei.

O’Hurley also wants viewers to come away realizing the important work of therapy dogs, pointing to Angels on a Leash, the nonprofit foundation founded by Frei that facilitates therapy dog visits to patients in hospitals and healthcare facilities around the country.

Beyond the world of show dogs and therapy dogs, though, O’Hurley’s focus is much broader. As the author of Before Your Dog Can Eat Your Homework, First You Have to Do It: Life Lessons from a Wise Old Dog to a Young Boy, It’s Okay to Miss the Bed on the First Jump: And Other Life Lessons I Learned From Dogs, and the children’s book The Perfect Dog, O’Hurley hopes that the show helps to educate viewers and, in the process, improves the lives of dogs not only during their peak years but far beyond.

“For me the thing that I walk away with and what I like people to walk away with is to see examples of responsible dog ownership, that dogs are lifetime commitments, says the actor and pet parent to a Havanese named Lucy, a terrier mix named Mia, and a rescue dog named Charlotte, adopted at a humane society event O’Hurley was working on in St. Louis.

“Sadly, our shelters are full of too many examples of people that took it as just a trial run and that saddens me. But I think we’ve gone a long way in educating people about the nature of responsible ownership.”

And that is truly something for which to give thanks.