How an Arizona rancher is searching for a better cow 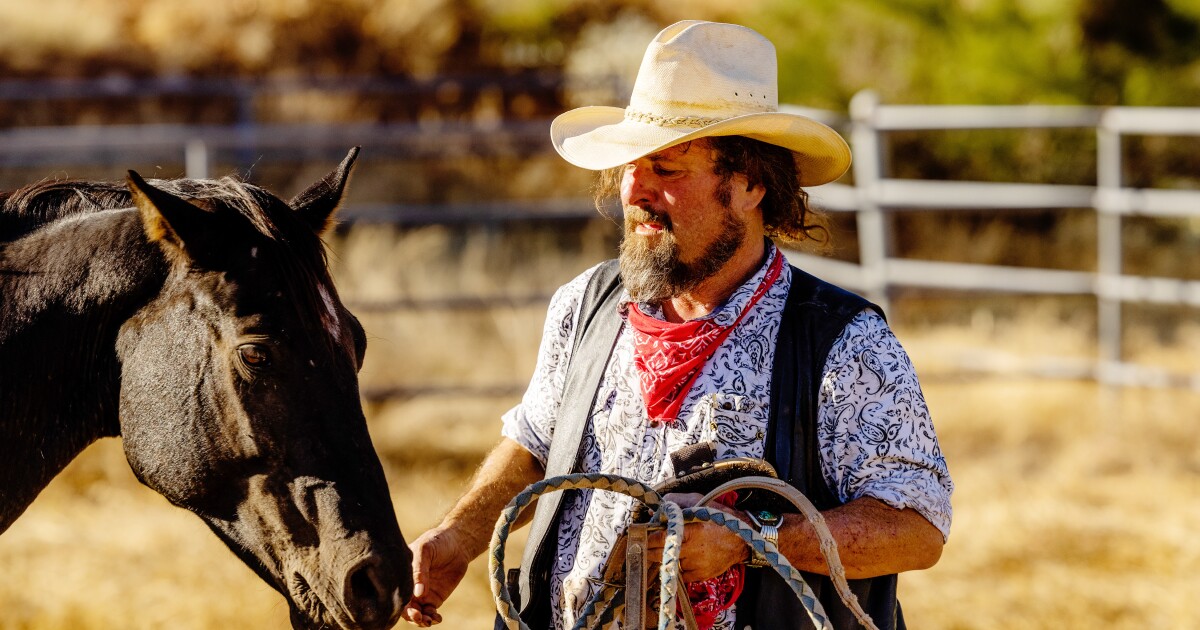 He calls them his “little project.”

Compared with humans, they’re not little at all. Some weigh 600 pounds. But for cattle, they’re tiny and immature — less than half the size of those usually slaughtered for beef.

Langdon Hill bought them at auction and gated them in his backyard, an acre covered in sudangrass hay and mesquite, jojoba and palo verde trees in the Aravaipa Canyon Wilderness 70 miles northeast of Tucson.

Calves, bulls and heifers, they come from breeds that naturally developed long ago in Brazil, England and India. Hill believes they could be key to transforming an industry that helps to feed the nation, yet one that is a driver of greenhouse gases and a culprit behind deforestation from the Amazon to Australia, where forests are routinely cleared for grazing.

Across Arizona and much of the U.S Southwest and northern Mexico, droughts and historic heat waves have left cattle with jutted ribs, gasping for life and threatening a food source that was never meant to survive in the desert but has become a key part of its economy.

As representatives of the world’s most powerful countries meet in Scotland for the United Nations conference on climate change, questions around cattle — their intense use of land and water and their release of gases that contribute to global warming — have been on many minds. The U.S. and dozens of countries have pledged to reduce methane emissions. Others such as Australia have refused, citing the beef industry as a reason.

Some believe weaning America — the fifth-largest producer of beef in the world — off cattle would make a significant contribution.

Then there’s a growing group of ranchers, like Hill, who think beef simply needs to be reimagined to survive.

“Our food industry is upside-down,” said Hill, 59, an environmentalist, onetime vegetarian and former industrial engineer-turned-cowboy. “We eat cheap, mass-produced, water-intensive meat fed on corn and we have too much of it.

Hill is experimenting on his 18,000-acre ranch in the dusty mountains of rural Arizona: crossbreeding in hopes of developing smaller, lankier cows that retain less heat, aren’t as thirsty and live off the native grasses and bushes without the massive grain feedlots synonymous with the American cattle industry. Perhaps, he theorizes, they might also let out less methane.

The average cow emits more than 200 pounds of methane in one year. That’s a tiny slice of U.S. emissions, far surpassed by the burning of fossil fuels. But methane is dozens of times better at trapping heat in the atmosphere than carbon dioxide, even though it dissipates after a decade compared to the hundreds of years carbon dioxide sticks around.

Even as meat substitutes flood the market, studies have shown that when eaten in moderation, beef and its nutrients can be part of a healthy diet. Cows also provide milk and fertilizer — and if managed well can help maintain rangeland soil and deter wildfires by eating plants that might otherwise catch aflame.

Some ranchers here, where cows mostly are raised on grass for just a few months before being shipped to packed feedlots where they grow faster on corn and hormones, are tinkering with diets to produce less methane.

They’re also moving toward breeds more accustomed to hotter, dryer climates while turning away from Angus cattle, which have come to dominate restaurant menus and grocery store freezers. The grass-fed, organic movement — in which cows are raised without feedlots, though they often need hay if there’s not enough rain or grass — is also on the rise.

On one side of the debate are the likes of Impossible Meat and Beyond Meat, companies that use food science to make burgers mimic the fatty marbling and juicy taste of ground beef.

Then there are those like Hill. He says his beef — not yet available on the market — will be more expensive but raised entirely on his farm before being sent for slaughtering and packaging. He dreams of exporting it to China and Japan, as well as selling it throughout the U.S.

Yet he wonders whether his model is sustainable in a world that wants cheap, plentiful food at the click of a button.

“We’re too late to do so much on this Earth,” he said recently while riding a black Mustang named Rosie into one of his corrals. “Running cattle, I think, still has time.”

Painted Cave Ranch sits on land next to the Aravaipa Creek, one of the few year-round natural streams in this part of the desert. Hill owns part of the property and leases the rest from the Bureau of Land Management.

A bumpy dirt road traces its way around the hilly ranch, with Hill’s house set in a canyon. A few hundred cattle roam freely alongside native desert bighorn sheep, mule deer and coatimundi among saguaro and cholla cactus. The cows — many Brahmans with origins in the subtropics and other hardy breeds — feed on leaves and beans from mesquite and palo verde trees and on grasses that grow after the rains and by the creek. They drink from narrow, long pools that pump water from huge feeding tanks as well as the stream.

Brahmans can better withstand the sun and are less susceptible to parasites than Angus, originally from Scotland and built with sturdy, low set black bodies made to survive harsh winters.

Hill also has Herefords, an English breed known for its fertility, as well as Beefmasters, a composite breed of Herefords, Brahmans and Shorthorn cattle that are more tolerant of drought. There are Charlois — a muscly French breed whose light butterscotch tone is desirable in a place where summer temperatures regularly hit three-digits — and Criollo, a breed brought to the Americas by Spanish colonizers and now raised in parts of Mexico. Smaller and able to survive without much help from humans, they’re known to travel farther for water and food, making them more adaptable for the desert.

In his backyard, Hill has several of these different cattle corralled together. He waits for them to mate.

“Hopefully by May, I’ll have some good genetics,” said Hill, who dons a cowboy hat, leather chaps and sports a graying beard.

The practice of crossbreeding cattle for physique and temperament is not new. Australia, among the world’s largest beef producers, has experimented widely with crosses since the mid-20th century.

“As the temperatures get hotter and hotter, more people are trying to adapt and think about how their cows can adapt,” said Rachel Cutrer, who co-runs B.R. Cutrer, a cattle breeding business in Wharton, Texas. She and her husband ship cattle and sperm around the world to ranchers who want to create crossbreeds.

“The average animal gets heat stress when the temperature goes above 80 degrees,” Cutrer said. “For a large portion of the world, it’s that temperature nearly all the time. Heat-stressed animals will pant and they will ultimately not want to eat.” Her animals come from a breed that has more sweat glands than others.

Joe Paschal, a rancher and animal science professor at Texas A&M University who researches breeding trends, described crossbreeding as an old habit that is making a comeback.

“From the 1980s on, everyone wanted to raise and eat Angus. But they’re being forced to change. Crossbreeding brings something we call hybrid vigor. You find two breeds that are very different, combine them and you’ll have the best selection of genes that nature takes out of it.”

In contrast to the corporations that control much of the seed, grain, chicken and pork production in the U.S., most ranches are still run by families. The setup is a result of biology. Each cow can have only one calf a year, compared with hens and sows that can birth and raise offspring to maturity in just a few months.

Corporations play a much bigger role in slaughterhouses and feedlots, where most farmers sell their cattle after they live a few months on the range. Across the country, 4-H clubs and Future Farmers of America chapters are training grounds for new generations in beef-sellers.

Hill’s path was different, as are his aspirations.

Born in Tucson to a university administrator and a mother who later became a Sedona restaurateur, he grew up riding horses on the family’s 20-acre property. They were well-known in town because of his grandmother, a philanthropist who gifted the land that became the cactus-laden Tucson Botanical Gardens. He’s named after a grandfather from several generations back who represented Maine in Congress.

As an architecture student at the University of Arizona in the mid-1980s, Hill patented a cheap metal door plate to fend off carjackers after his Volkswagen Golf was broken into six times. A pair cost $6 to make. He sold them for $59.

Hill spent the next two decades living in Luxembourg, where he designed and sold aftermarket accessories for Audis and Volkswagens. With his profits, he purchased nearly a whole block of houses near downtown Tucson, as well as an office building that the city’s hockey team now rents for its headquarters.

“I was getting bored. I didn’t want to live a high-stress life. I didn’t want to keep chasing business deals,” Hill said. “The car industry was wasting precious resources and clearly not as green as it could be.”

In 2005, he moved permanently to Arizona and bought the ranch. At first, the goal was to live a quieter life, to partially retire in his 40s.

Then he signed up for classes on beef at the University of Arizona. He met ranchers and let them keep cattle on his land in exchange for mentorship. He bought cows. It was a new hobby for a self-proclaimed “spiritual wanderer” who once spent a year studying Buddhism at Deer Park Monastery in Escondido.

For a few years, Hill sold meat from his cattle at farmers markets. He still keeps a few frozen packages in the freezer for guests.

But Arizona’s worsening drought made him rethink things as his herd’s habitat dried up. He saw the emergence of popular meat alternatives that were made in factories with a fraction of his carbon footprint.

An inventor all his life, Hill believed he could find a way to do things better. He scoured Arizona’s cattle auctions, snapping up animals that no one else wanted and plopping them in his yard to breed. He stopped killing the cows — for now — and instead toyed with their genetics, a process that can take years and several generations.

He’s not sure what his crossbreeds will bring, or even when the calves will come. He’s already broken some of the rules by naming a few of his favorites — Fernando and Bronco. Hill doesn’t know if he will find success, or if his business will even be up and running during his lifetime.

His wife, Tori, works late nights in a rehab facility in Tucson and rarely visits the ranch. His dad, retired, finds his son’s life unusual but tolerates it. Hill has three dogs but no kids to support. He considers himself lucky that money and profit aren’t problems.

“That’s also why it’s my responsibility to try to figure this out and do my small part,” he said. “I have the time to experiment.”

Each Wednesday, he drives an hour-and-a-half to Marana, Ariz., where he attends a cattle auction. Sometimes he sells animals that don’t fill the bill of the cows he wants to create. Mostly, he watches for breeds to add to his herd.

The other week, he thought he had purchased eight Hereford cattle but had misidentified them. They were Beefmasters. Still learning, he repeated a mantra to himself to avoid getting angry. It’s the same one he thinks of when looking at the world of cattle and climate, and how things could change for the better.

“All things are gradual. It’s just the satisfaction of making a little progress.”