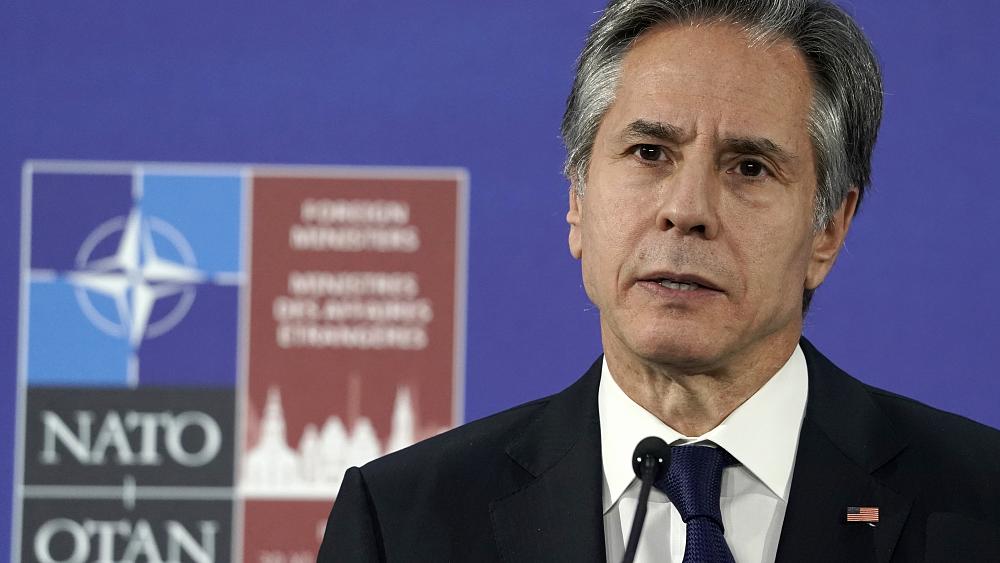 US Secretary of State Antony Blinken threatened Moscow with heavy economic sanctions if President Vladimir Putin attacks Ukraine, insisting that “diplomacy is the only responsible way to resolve this potential crisis”.

Tensions over the Russian troop build-up along the border of Ukraine, whose government is seeking to align with NATO and the West, have been a focus of Blinken’s weeklong Europe trip and were top of the agenda at his meeting with NATO counterparts in Latvia on Wednesday.

“We don’t know whether President Putin has made the decision to invade. We do know that he is putting in place the capacity to do so on short order should he so decide. We must prepare for all contingencies,” Blinken said.

Blinken added that the US has “made it clear to the Kremlin that we will respond resolutely, including with a range of high impact economic measures that we’ve refrained from using in the past”.

He declined to provide details about the sanctions but went on by saying that “NATO is prepared to reinforce its defenses on the eastern flank,” without elaborating.

The military organisation already has forces stationed in Estonia, Latvia, Lithuania, and Poland.

Blinken also said he would urge Foreign Minister Sergei Lavrov to return to talks under the “Normandy” format, with the US, France, and Germany, when he meets Russia’s top diplomat in Sweden on Thursday.

“Diplomacy is the only responsible way to resolve this potential crisis,” Blinken added.

However, Peter Dickinson, a specialist on Ukraine at the Atlantic Council, told Euronews that “it is limited what NATO can actually put on the table”.

“Obviously, Ukraine and Russia are aware that there is no real option of any military involvement from NATO’s side. So what we’re really talking about is economic sanctions, perhaps some political sanctions as well. But fundamentally, it will be economic measures that would hopefully restrain Russia and cause them to think twice,” Dickinson added.

“Some have speculated this may mean the removal or restriction of Russia’s access to things like the international Swiss banking system, which would have a major impact on the Russian economy. The question is whether these economic factors would be enough to deter Russia from something that many believe is a fundamental foreign policy priority for President Putin, which is to reassert Russian authority over Ukraine,” he went on.

But efforts to reach a political settlement have failed and sporadic skirmishes have continued along the tense line of contact.

While in Stockholm, on the sidelines of a minister-level meeting of the Organisation for Security and Cooperation in Europe, Blinken will also hold talks with Ukrainian Foreign Minister Dmytro Kuleba.

Watch the full interview with Ukraine Editor at the Atlantic Council, Peter Dickinson, in the video player above.