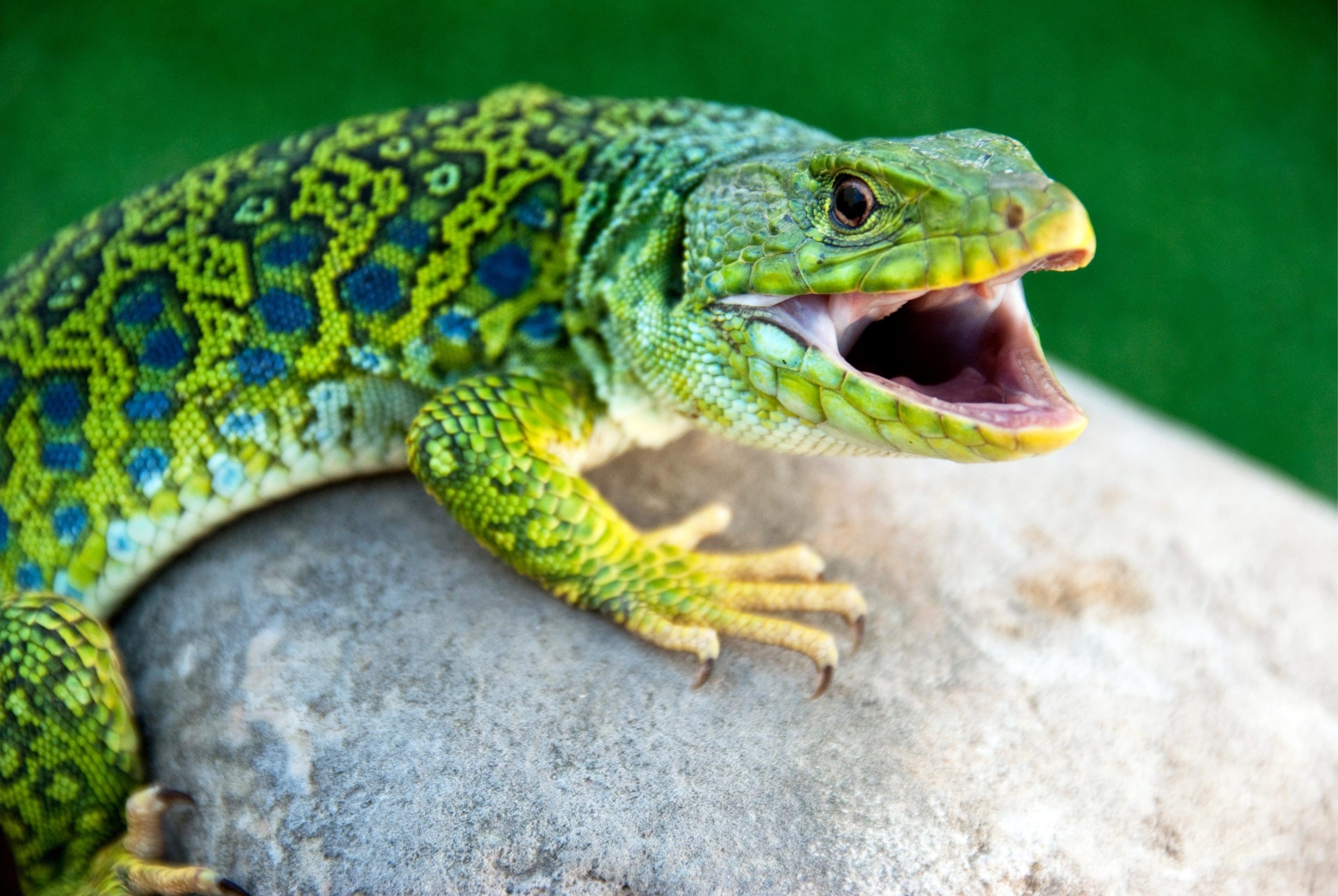 A multidisciplinary team at the UNIGE has succeeded in explaining the complex distribution of scales in the ocellated lizard by means of a simple equation.

The shape-shifting clouds of starling birds, the organization of neural networks or the structure of an anthill: nature is full of complex systems whose behaviors can be modeled using mathematical tools. The same is true for the labyrinthine patterns formed by the green or black scales of the ocellated lizard. A multidisciplinary team from the University of Geneva (UNIGE) explains, thanks to a very simple mathematical equation, the complexity of the system that generates these patterns. This discovery contributes to a better understanding of the evolution of skin color patterns: the process allows for many different locations of green and black scales but always leads to an optimal pattern for the animal survival. These results are published in the journal Physical Review Letters.

A complex system is composed of several elements (sometimes only two) whose local interactions lead to global properties that are difficult to predict. The result of a complex system will not be the sum of these elements taken separately since the interactions between them will generate an unexpected behavior of the whole. The group of Michel Milinkovitch, Professor at the Department of Genetics and Evolution, and Stanislav Smirnov, Professor at the Section of Mathematics of the Faculty of Science of the UNIGE, have been interested in the complexity of the distribution of colored scales on the skin of ocellated lizards. A multidisciplinary team has succeeded in explaining the complex distribution of scales in the ocellated lizard by means of a simple equation.

The individual scales of the ocellated lizard (Timon lepidus) change color (from green to black, and vice versa) over the course of the animal’s life, gradually forming a complex labyrinthine pattern as it reaches adulthood. The UNIGE researchers have previously shown that the labyrinths emerge on the skin surface because the network of scales constitutes a so-called ‘cellular automaton’. “This is a computing system invented in 1948 by the mathematician John von Neumann in which each element changes its state according to the states of the neighboring elements,” explains Stanislav Smirnov.

In the case of the ocellated lizard, the scales change state — green or black — depending on the colors of their neighbors according to a precise mathematical rule. Milinkovitch had demonstrated that this cellular automaton mechanism emerges from the superposition of, on one hand, the geometry of the skin (thick within scales and much thinner between scales) and, on the other hand, the interactions among the pigmentary cells of the skin. The patterns of the ocellated lizard are predictable by a mathematical model.

The road to simplicity

Szabolcs Zakany, a theoretical physicist in Michel Milinkovitch’s laboratory, teamed up with the two professors to determine whether this change in the color of the scales could obey an even simpler mathematical law. The researchers thus turned to the Lenz-Ising model developed in the 1920’s to describe the behavior of magnetic particles that possess spontaneous magnetization. The particles can be in two different states (+1 or -1) and interact only with their first neighbors.

“The elegance of the Lenz-Ising model is that it describes these dynamics using a single equation with only two parameters: the energy of the aligned or misaligned neighbors, and the energy of an external magnetic field that tends to push all particles toward the +1 or -1 state,” explains Szabolcs Zakany.

A maximum disorder for a better survival

The three UNIGE scientists determined that this model can accurately describe the phenomenon of scale color change in the ocellated lizard. More precisely, they adapted the Lenz-Ising model, usually organized on a square lattice, to the hexagonal lattice of skin scales. At a given average energy, the Lenz-Ising model favors the formation of all state configurations of magnetic particles corresponding to this same energy. In the case of the ocellated lizard, the process of color change favors the formation of all distributions of green and black scales that each time result in a labyrinthine pattern (and not in lines, spots, circles, or single-colored areas…).

“These labyrinthine patterns, which provides ocellated lizards with an optimal camouflage, have been selected in the course of evolution. These patterns are generated by a complex system, that yet can be simplified as a single equation, where what matters is not the precise location of the green and black scales, but the general appearance of the final patterns,” enthuses Michel Milinkovitch. Each animal will have a different precise location of its green and black scales, but all of these alternative patterns will have a similar appearance (i.e., a very similar ‘energy’ in the Lenz-Ising model) giving these different animals equivalent chances of survival.