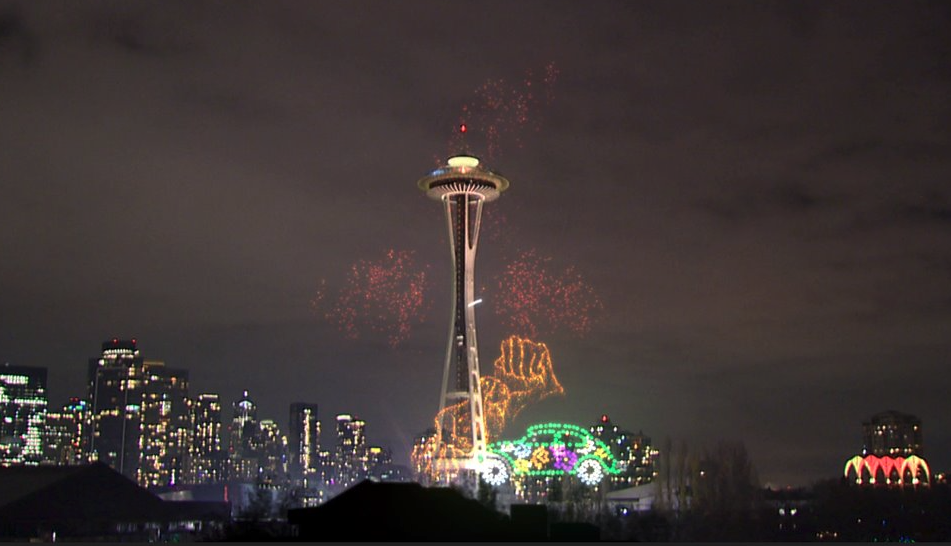 The Space Needle fireworks display has long been considered the iconic New Year’s Eve celebration for the West Coast. After a wind storm derailed the show in 2019 and the pandemic pushed everything online in 2020, live pyrotechnics will return to the landmark structure on Friday night.

But the fireworks and light show visible at the Needle will retain a digital component for viewers of the broadcast on television and streaming online. And that’s still the best way to catch the full T-Mobile New Year’s at the Needle, as no public events are being held at Seattle Center and people are encouraged to “stream in the new year from home” during a surge in COVID-19 cases.

“The pandemic’s been around for two years, we haven’t had real fireworks in two years,” Space Needle COO Karen Olson told GeekWire. “We want that tradition, the symbolic release of real fireworks, to a real path toward recovery.”

But a show built around streaming digital effects last year was such a visual hit that Needle officials kept the idea in their back pocket to somehow blend the physical and augmented realities.

“After last year we said, ‘We should never be just a fireworks show,” Olson said. “We’re Seattle, we’re innovation, we’re the Space Needle, we should do something cool.”

Producers of the show have turned to Bellevue, Wash.-based Lightspeed Design, a longtime visual effects company that performs a variety of creative and technical work. Lightspeed once facilitated laser shows at Pacific Science Center before moving into 3D technology for museums. Its main business now is the technology used in first-run 3D cinemas around the world.

CEO Chris Ward and art director Bob Mueller are co-founders of Lightspeed and they’ve been hustling their six-person company to finish the show over the past four weeks.

When the City of Seattle denied the Space Needle the necessary permit to have a fireworks show last year because of COVID, that word came on Oct. 1. This year, the City initially said “maybe” and didn’t give the final OK until Nov. 10, according to Olson.

Lightspeed is adding an augmentation layer on top of the live fireworks show. The creators have been constructing pre-visualizations of how it will all look using camera points of view of the Needle provided by KING 5. New POVs were specifically chosen to avoid standard wind direction around the Needle, which can create confusion on the telecast with haze and smoke from the fireworks.

“All the elements live around the Needle, they come in to interact with it, and they interact with the fireworks,” Ward said of a show designed to pay tribute to Seattle neighborhoods, the city’s arts, music and more.

While Lightspeed is overlaying images above and around the Needle, they’re “trying to keep to the core hero of the show — the Needle,” Mueller said.

His hand drawing of the famous Fremont Troll is one element they were willing to tease before Friday. The artwork is finalized using 3D Studio Max and Adobe’s After Effects so it looks like it’s made of fireworks. As a Volkswagen Beetle moves past, the Troll grabs it — just like the actual sculpture has done under the Aurora Bridge.

“That troll is 250 feet tall,” Mueller said of the relative scale of the digital creation to the actual Needle. “If you were were to create a scaffold and attach fireworks to it, that would be a 250-foot-tall scaffolding. It’s beyond what you would normally expect to see in this sort of an effect, but we’re larger than life, so that’s what we’re doing.”

For those concerned that the fireworks will get second billing to digital enhancements, Lightspeed assures viewers that their work and the fireworks are not always on screen in the exact same time and space.

“We allow the fireworks to have solos,” Mueller said. “So that they can be appreciated for what they are without any interference or overlay. But when we’re overlaying we pretty much demand attention because we’re using technology to tell a story.”

Olson called it all “crazy complicated” and said they believe it’s the first live fireworks show to have a live AR overlay. She said the idea was somewhat reminiscent of the 2020 Tokyo Olympics closing ceremony, where it looked like lighted cell phones flew into the sky and formed the Olympic rings.

Olson wants similar buzz around what they pull off at the Space Needle.

“We thought, let’s create a show that will have people asking, ‘Was that real? What did they do?’” Olson said, calling what’s coming on New Year’s Eve “a beautiful, digital, big hug to Seattle.”

The T-Mobile New Year’s at the Needle will air live Friday at 11:35 p.m. PT on KING 5, and will stream exclusively on KING 5’s website and on the KING 5 app.