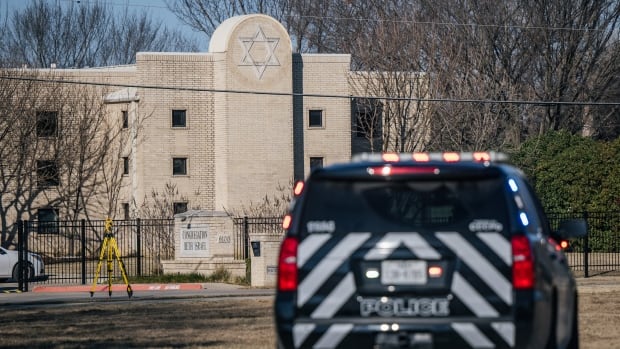 The rabbi of a Texas synagogue where a gunman took hostages Saturday during live streamed services said he threw a chair at his captor before escaping with two others after an hours long standoff, crediting past security training for getting himself and his congregants out safely.

Rabbi Charlie Cytron-Walker told CBS Mornings Monday that he let the gunman inside the Congregation Beth Israel synagogue in Colleyville, Texas, about 40 km northwest of Dallas, because he appeared to need shelter.

He said the man was not threatening or suspicious at first. Later, Cyrton-Walker said he heard a gun click as he was praying.

Rabbi Charlie Cytron Walker recalls how he and two other hostages escaped after being held at gunpoint in a Texas synagogue over the weekend: “I threw a chair at the gunman and I headed for the door.” pic.twitter.com/GoRCgI4xlL

Jeffrey R. Cohen, another man who was held hostage, described the ordeal on Facebook on Monday.

“First of all, we escaped. We weren’t released or freed,” said Cohen, who was one of four people in the synagogue for services that many other members of Congregation Beth Israel were watching online. The first hostage was released shortly after 5 p.m.

‘I threw a chair’

Cohen said the men worked to keep the gunman engaged and talked to him as he lectured them. At one point the situation appeared to devolve and Cohen said the man told them to get on their knees.

Cohen recalled rearing up in his chair and slowly moving his head and mouthing “no.” As the gunman moved to sit down, Cohen said the rabbi yelled at them to run.

“The exit wasn’t too far away,” Cytron-Walker said.

“I told them to go. I threw a chair at the gunman, and I headed for the door. And all three of us were able to get out without even a shot being fired.”

Four hostages are safe after being held for 11 hours inside a Texas synagogue by an armed man demanding the prison release of a Pakistani woman convicted of shooting at soldiers and FBI agents. 2:01

Authorities identified the hostage-taker as 44-year-old British national Malik Faisal Akram, who was killed Saturday night after the last three hostages ran out of the synagogue in Colleyville around 9 p.m.

The FBI on Sunday night issued a statement calling the ordeal “a terrorism-related matter, in which the Jewish community was targeted” and said the Joint Terrorism Task Force is investigating.

Canadian synagogues urged to be vigilant

Jewish community leaders are advising Canadian synagogues to increase their level of vigilance in case of a “copycat” attack following the Texas hostage situation.

Toronto police said they have also increased patrols around synagogues and other Jewish community buildings, although they have said there is no known threat at this time.

B’nai Brith, a group that monitors anti-Semitism and advises the Jewish community on security, says it has advised Jewish institutions to take extra security precautions.

Michael Mostyn, chief executive officer of B’nai Brith Canada, says it is taking seriously the possibility of copycat acts of violence, noting that Jews make up just over one per cent of Canada’s population, but are victims of 60 per cent of hate crimes aimed at religious minorities.

Authorities have declined to say who shot the hostage taker, saying it was still under investigation.

The investigation stretched to England, where late Sunday police in Manchester announced that two teenagers were in custody in connection with the standoff.

Greater Manchester Police tweeted that counter-terrorism officers had made the arrests but did not say whether the pair faced any charges.

Akram, who was called Faisal by his family, was from Blackburn, an industrial city in northwest England. His family said he’d been “suffering from mental health issues.”

“We would also like to add that any attack on any human being, be it a Jew, Christian or Muslim, etc., is wrong and should always be condemned,” wrote his brother, Gulbar Akram.