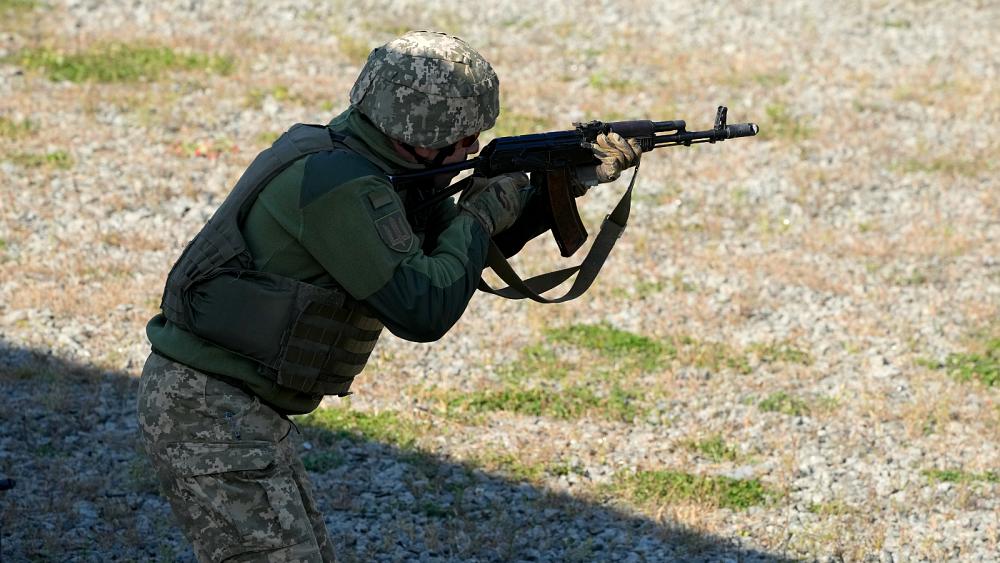 Despite a flurry of summits this week aimed at defusing tensions, the fear of a Russian invasion remains real in Ukraine.

That has seen Ukrainians sign up for military training or volunteer to be army reservists.

Alisa Bankovska is one of the latter. A cyber security specialist and mother in her daily life, she has been gaining weapons and first aid training as well as military tactical skills in the government programme preparing reservists to form Ukraine’s Territorial Defence Forces.

Every weekend she attends special military training to learn how to defend herself and her family from possible Russian aggression.

Bankovska believes the more people who get trained, the less likely an “enemy” would be willing to attack.

“If the enemy knew that everybody in a country, well, let’s say many people in a country, have the skills to use rifles and to defend their home, there will be no situation like in Crimea 2014 or like in Donetsk and Lugansk,” she said.

In 2014, Russia annexed Ukraine’s Crimean Peninsula after the ouster of its Moscow-friendly leader and threw its weight behind a separatist insurgency in the country’s east, where more than seven years of fighting has killed over 14,000 people.

Now around 20 brigades of the Territorial Defence Forces have been formed and trained to support Ukraine’s army and protect key infrastructure in case of a Russian attack.

IT manager Dmytro Kostykevich said he did not know how to fire a weapon in 2014, but eight years later he oversees the training of reservists.

Kostykevich does not believe NATO will invite Ukraine into its alliance any time soon, so his country has to be prepared.

“It is important that we defend ourselves: it has been 8 years of war. I think everyone should be able to hold at least one weapon,” echoed Vlas Gonchauk, one of the volunteers.

“NATO countries are not going to fight for us. That much is clear. So it comes down to whether we are willing to defend ourselves,” Gonchauk went on.

In the capital Kiyv, old bomb shelters built during the Cold War are being refurbished. Now, locals hope they will protect them from a possible threat coming from the east.

“Since 2014, after the annexation of Crimea and war in the east, we have been refurbishing the cellars. There’s toilet paper, respirators, candles, soap and about 68 people can fit in this bunker,” revealed Igor Overchuk, a bunker inspector.

Meanwhile, Russia has been engaging in talks first with the United States and with NATO later this week amid attempts to de-escalate tensions following the massing of Russian forces at the Ukrainian border.

In Geneva on Monday, Moscow insisted on guarantees to halt NATO’s expansion and even roll back the military alliance’s deployments in Eastern Europe, while Washington firmly rejected the demands as a nonstarter.

Kremlin spokesman Dmitry Peskov said Moscow will watch a round of Russia-NATO talks in Brussels on Wednesday and a meeting of the Organization for Security and Cooperation in Europe in Vienna on Thursday to determine whether it would make sense to continue the negotiations.