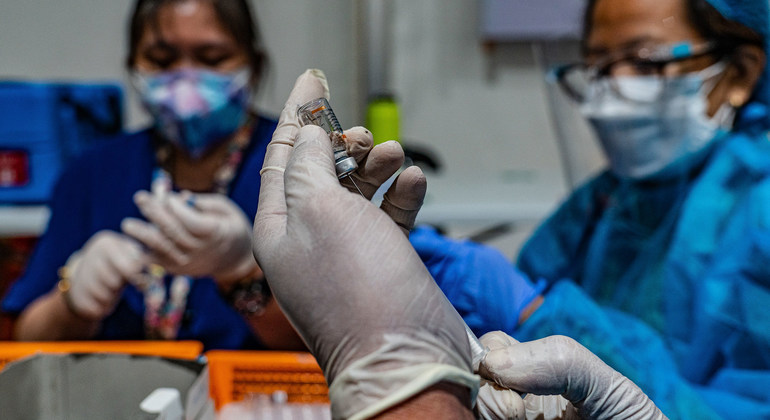 That grim estimate features in a new WHO working paper based on the 3.45 million coronavirus-related deaths reported globally to the UN health agency up to May; a figure that WHO said may well be at least 60 per cent lower than the actual number of victims.

To highlight the need for better protection, WHO was joined by global partners working to end the pandemic, to issue an urgent call for concrete action on behalf of workers in the sector.

Speaking to journalists in Geneva, WHO Director-General, Tedros Adhanom Ghebreyesus, reiterated that “the backbone of every health system is its workforce.”

“COVID-19 is a powerful demonstration of just how much we rely on these men and women, and how vulnerable we all are when the people who protect our health are themselves unprotected”, he added.

WHO and partners said that apart from huge concern over deaths, an increasing proportion of the workforce continue to suffer from burnout, stress, anxiety and fatigue.

They are calling on leaders and policy makers to ensure equitable access to vaccines so that health and care workers are prioritized.

By the end of last month, on average, two in five of these workers are fully vaccinated, but with considerable difference across regions.

For him, more than 10 months since the first vaccines were approved, “the fact that millions of health workers still haven’t been vaccinated is an indictment on the countries and companies that control the global supply of vaccines”.

Action from the G20

In 10 days’ time, the leaders of the G20 leading industrialized nations will meet. Between now and then, roughly 500 million vaccine doses will be produced.

That’s the number needed to achieve the target of vaccinating 40 per cent of the population of every country, by the end of the year.

Currently, 82 nations are at risk of missing that target. For about 75 per cent of those countries, it’s a problem of insufficient supply. The others have some limitations that WHO is helping solve.

These nations have pledged to donate more than 1.2 billion vaccine doses to COVAX. According to WHO, so far, only 150 million have been delivered.

If they don’t do it, Mr. Brown argued, they will be guilty of an “economic dereliction of duty that will shame us all.”

Mr. Brown also warned that “the longer vaccine inequity exists, the longer the virus will be present.”