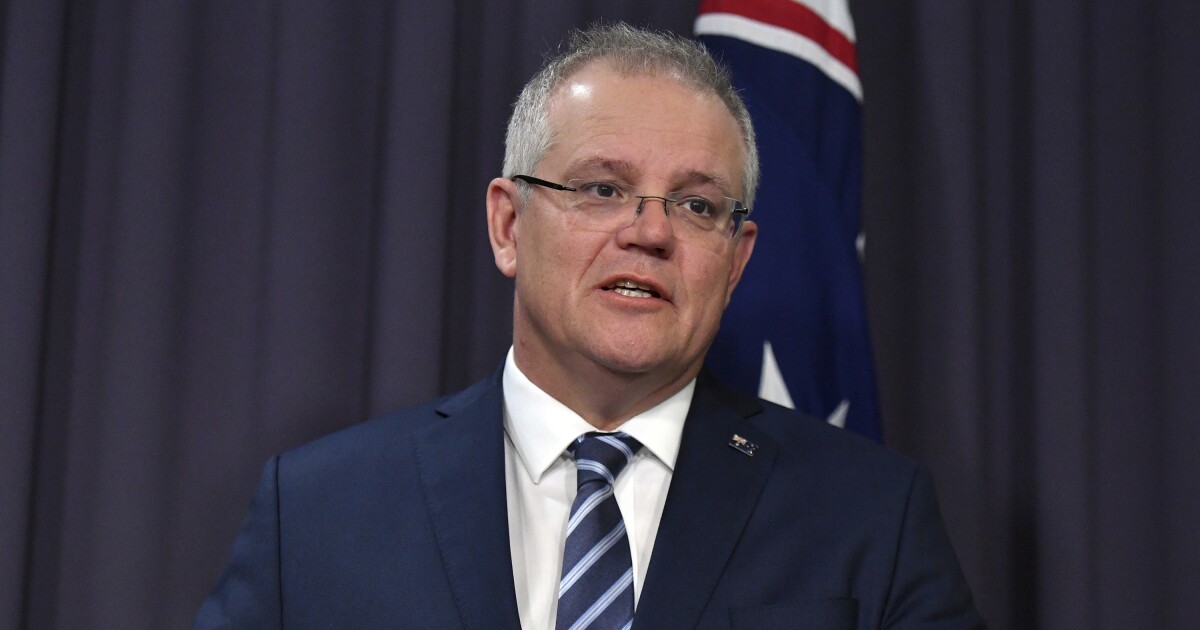 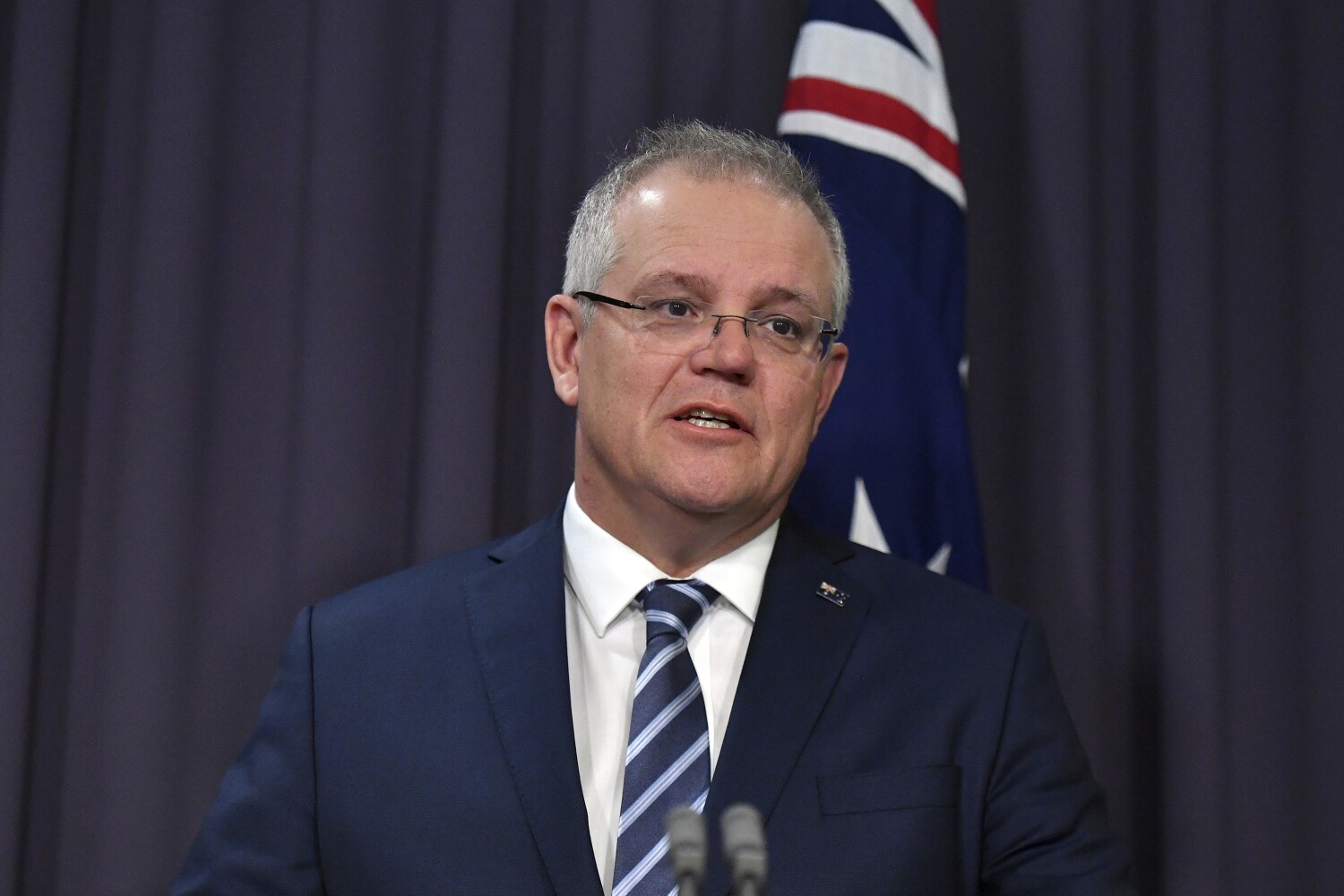 But when hailstones recently struck northern Queensland, just as the government’s junior party was debating a plan to reduce greenhouse emissions, it seemed like a sign from above. The 6-inch chunks of ice pounded cars and shattered windshields.

Days later, the government, with historic support from the junior National Party, endorsed Prime Minister Scott Morrison’s goal of achieving net zero emissions in 2050. Morrison could be a leading voice to replace the world’s reliance on fossil fuels such as oil and gas with cleaner alternatives such as solar or hydrogen.

Instead, he’s headed to the United Nations Climate Change Conference that begins Sunday in Glasgow, Scotland, with a policy light on detail and soundly criticized by many Australians, from scientists to politicians, as leaving other countries to do the heavy lifting as greenhouse gas emissions and global temperatures keep rising.

Australia won’t shut down coal or gas production or exports and there will be no job losses in farming, mining or gas as a result of the international push to address climate change, Morrison told reporters while presenting the plan.

“It’s an energy, trade and economic plan, not just an environmental plan,” he said. “It is not a revolution, but a careful evolution to take advantage of changes in our markets.”

Net zero refers to balancing the greenhouse gas emissions going into and coming out of the atmosphere.

Australia’s current 2030 target aims to cut emissions by 26%-28% below 2005 levels, a target that climate experts and other countries say is too low. Morrison said his country is on track to beat the target and reduce emissions by 30% to 35%. That’s considerably short of the 50%-52% target  announced by President Biden in April for U.S. emissions by 2030.

While Australia is a big exporter of carbon-rich fossil fuels, it is also a big and growing exporter of low-carbon new-energy metals needed to replace fossil fuels. It is well placed to benefit from growing demand for metals such as nickel, copper, lithium and cobalt.

Government subsidies for solar energy have led to Australians adopting rooftop solar panels so enthusiastically that the grid operator has had to bring forward plans to upgrade the grid to prevent blackouts.

But adoption of electric vehicles, which can lead to lower carbon emissions, trails other developed nations even though Australia is the world’s biggest exporter of the lithium used in the batteries of vehicles.

When he left for Glasgow on Thursday, Morrison fended off a suggestion from the UK hosts of the conference, known as COP26, that Australia make a more ambitious contribution to the 2030 target.

Morrison has been seen as a supporter of the fossil fuel industry at least since February 2017, when, as treasurer, he brandished a lump of coal in Parliament and told lawmakers how the mineral had made Australia one of the wealthiest countries in the world.

The former marketing executive – derisively called “Scotty from marketing” by his critics – won leadership of the conservative Liberal Party and the government when Prime Minister Malcom Turnbull was deposed in a party room battle in 2018. Morrison led the party to a narrow victory in 2019, in part on a promise to take a cautious approach to climate change policies.

“What is important is that I act consistent with the mandate I had from the Australian people,” he told reporters. “They rejected a 45% target at the last election. They endorsed a meet-and-beat target of 26 to 28%, which is what we’ve done.”

In the run up to the climate change conference, politicians, comedians and princes have urged Australia to do more. Comedian Dan Ilic crowdfunded a campaign to take out advertisements in Times Square, mocking Australia’s track record; Prince Charles diplomatically urged Morrison to attend COP26.

The net zero plan Morrison is taking to Glasgow will not look impressive among the 38 nations in the Organization for Economic Co-operation and Development, said Jeremy Moss, a professor of political philosophy at the University of New South Wales.

This “last-minute commitment to net zero will leave Australia more closely aligned with Saudi Arabia than the U.S. and Europe,” Moss said, referring to the Middle Eastern country that is the world’s biggest oil exporter. Saudi Arabia has said it will reduce carbon emissions to net zero by 2060 although it doesn’t plan to stop producing oil.

“Australia has lost an opportunity to show how a wealthy democratic country can transition away from dependence on fossil fuel exports,” Moss said.

Apart from not shutting down coal and gas, Morrison’s plan pledges $20 billion in technology investments expected to unlock at least $80 billion of private and public investment in clean hydrogen, carbon capture and storage and energy storage.

Mike Cannon-Brookes, the Australian U.S.-based billionaire and co-founder of software company Atlassian, said Australia’s plan paled in comparison to the UK proposal, which details pathways for every sector to 2037.

Morrison’s plan is meaningless without strong action this decade, Simon Bradshaw, the head of research at the Climate Council, said in an email. The organization favors Australia reducing its emissions by 75% by 2030.

When Morrison says his strategy is about “technology, not taxes,” it’s a reference to the legacy of the impact of climate change policies on Australian politics. Policies to reduce emissions — like a carbon emissions trading scheme or a carbon tax — have been seen by lawmakers to be a threat to jobs and incomes that could cost them votes in elections.

Morrison became prime minister after Turnbull’s plan for an energy and climate change policy made Turnbull unpopular within his party.

National Party support, stemming from the vast Australian countryside where mining and farming are strongholds, is crucial for Morrison if he is to win an election due in the next 12 months. The partnership between the Liberal Party Morrison now leads and the Nationals has lasted 75 years.

The opposition Labor Party led Morrison’s Coalition 54%-46% in a poll published in the Australian newspaper in late October.

Representatives of Australia’s most popular European car, Volkswagen, say it is becoming the biggest seller of affordable EVs everywhere but in Australia because of the government’s failure to adopt tighter restrictions on vehicle emissions such as those required in Europe.

Australia is “an automotive dumping ground for auto engines that our competitors cannot sell in other markets,” said Volkswagen Australia’s Managing Director Michael Barstch. The continued lack of federal leadership on EVs and its aversion to setting emissions targets means “Australia languishes in the automotive third world,” he said.

The Australian government’s climate approach, even after the National Party’s endorsement of Morrison’s plan, means it risks being left behind, particularly as other regions act more resolutely and investment increasingly seeks “green” criteria, some observers say.

“The advantage of adopting meaningful 2030 emission reduction targets now is that the economy won’t be littered with stranded fossil fuel assets in the future,” Moss said.

Petrakis is a special correspondent.