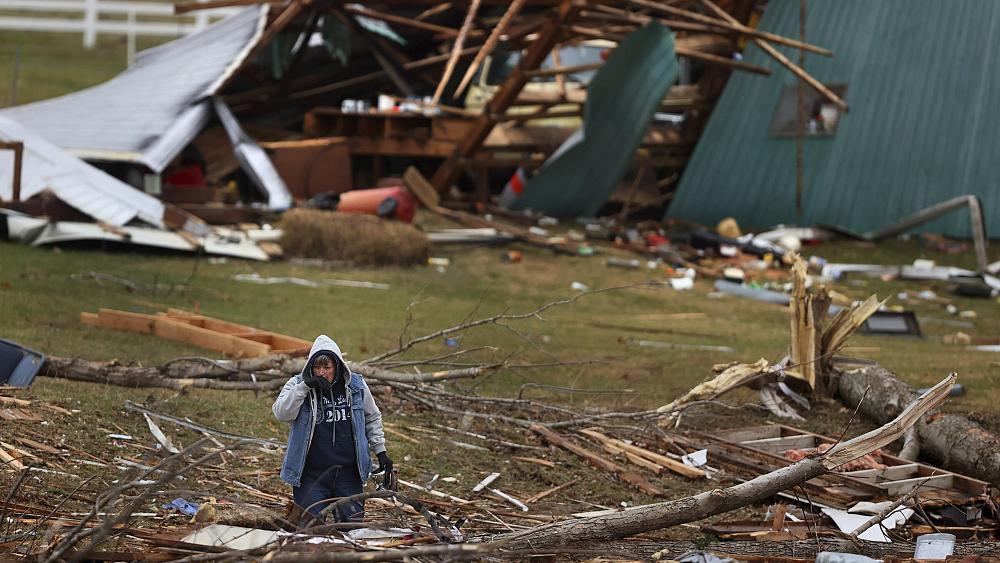 At least 70 people are feared dead in the US state of Kentucky after tornadoes tore through several midwestern states.

“This has been the most devastating tornado event in our state’s history,” Kentucky Governor Andy Beshear said, emphasising that the death toll is likely to rise.

The tornado hit a factory in Mayfield, Kentucky where 110 people were at the time, the governor said.

“It’s very hard, really tough, and we’re praying for each and every one of those families,” he said.

US President Joe Biden said he was briefed on the “devastating tornadoes across the central US.”

“To lose a loved one in a storm like this is an unimaginable tragedy. We’re working with Governors to ensure they have what they need as the search for survivors and damage assessments continue,” Biden tweeted.

Meanwhile, at least one person died after severe weather struck an Amazon facility in Edwardsville, Illinois, police Chief Mike Fillback told reporters on Saturday. The roof of the building was ripped off and a wall about the length of a football field collapsed.

It wasn’t immediately clear whether the damage was caused by straight-line storms or a tornado, but the National Weather Service office near St. Louis reported “radar-confirmed tornadoes” in the Edwardsville area at around the time of the collapse.

About 30 people who were in the building were taken by bus to the police station in nearby Pontoon Beach for evaluation.

Rescue crews were still sorting through the rubble early on Saturday, with the process expected to take several hours.

“The safety and well-being of our employees and partners is our top priority right now,” Amazon spokesperson Richard Rocha said in a written statement Friday night. “We’re assessing the situation and will share additional information when it’s available.”

Around 48 kilometres west of St Louis, workers at a National Weather Service office took shelter as a tornado passed nearby.

Tornadoes and storms strike throughout central US

A tornado struck the Monette Manor nursing home in Arkansas on Friday night, killing one person and trapping 20 people inside as the building collapsed, Craighead County Judge Marvin Day told The Associated Press.

Five people had serious injuries, and a few others had minor ones, he said. The nursing home has 86 beds.

Day said another nursing home about 32 kilometres away in Truman was badly damaged but no injuries were reported. The residents were being evacuated because the building is unsafe.

Three storm-related deaths were confirmed in Tennessee, said Dean Flener, spokesman for the Tennessee Emergency Management Agency. Two of the deaths occurred in Lake County, and the third was in Obion County — both in the northwestern corner of the state.

In Kentucky, several buildings collapsed during the severe weather that struck Mayfield, said Sarah Burgess, a trooper with the Kentucky State Police.

In Bowling Green, Western Kentucky University said on Twitter that emergency crews were assessing significant storm damage and that no injuries were immediately reported. However, the school called off commencement ceremonies that were planned for Saturday because the campus was without power.

Rescue efforts in Bowling Green and elsewhere were hampered by debris strewn across roads. Ward said numerous apartment complexes in Bowling Green had major structural damage, and some factories had collapsed during the storms.

“Right now we’re focusing on the citizens, trying to get to everybody that needs us,” Ward said.