Shale Oil Is Booming Again in the Permian 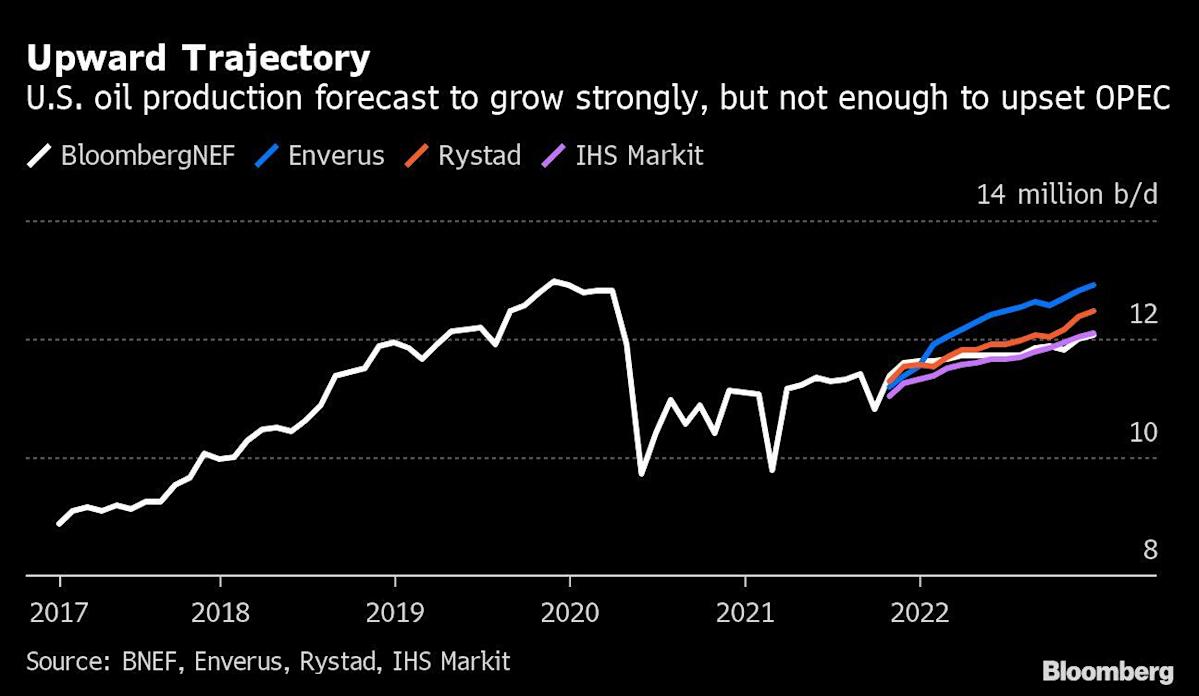 (Bloomberg) — Oil prices above $80 a barrel are once again spurring a revival of shale drilling in America’s biggest oil field, where production is expected to return to pre-pandemic highs within weeks.

Only this time, the surge is being driven by private operators, rather than the publicly traded companies that fueled the previous booms. And they see little reason to slow things down.

Increased access to financing and strong oil demand has created an opening for closely held producers, most of whom are backed by private equity or family money, to ramp up output in West Texas and southeast New Mexico. With the other major U.S. shale basins either holding steady or declining, according to BloombergNEF, the surging growth in the Permian isn’t likely to risk upsetting OPEC or tanking crude prices as it did in previous shale booms—at least not yet.

“It’s a win for the privates without being a loss for the oil markets,” said Raoul LeBlanc, an analyst at IHS Markit Ltd. “The big takeaway is that private growth won’t ruin the party.”

It’s a tenuous balance, and one that could shift quickly if oil prices continue to march higher. U.S. production growth was so strong over the past decade—and took so much market share from OPEC and its allies—that the cartel was willing to engage in all-out supply wars in both 2014 and 2020. The temperature has since come down as global demand for oil surges, especially amid a need to supply fuel-hungry Europe and Asia, removing some competitive pressure between suppliers.

That dynamic is exactly the signal private drillers have been waiting for. Trigo Oil & Gas LLC, three-person upstart company, just drilled its first two wells in Reeves County, Texas, near the New Mexico border, with a third on the way. After spending most of the pandemic trying unsuccessfully to finance the wells, Trigo scored deals in August with two Oklahoma City-based investors, right before a lease was about to expire, said its 37-year-old chief executive officer, Travis Wheat.

With private fleets running hot, production from the Permian Basin will likely reach its pre-pandemic record high of 4.9 million barrels a day as soon as this month and will continue climbing steadily in 2022, Rystad Energy forecasts. The Permian is a particularly attractive place to ramp up production because of its low breakeven costs and high rates of productivity.

So what are all the public companies in the Permian doing? They have ratcheted back growth rates significantly.

Chastened by a decade of poor returns, public companies such as Pioneer Natural Resources Co. and Diamondback Energy Inc. are paying back debt and passing profits back to shareholders via dividends and stock buybacks rather than reinvesting the bulk of their cash in new wells. Integrated majors Exxon and Chevron are also preaching prudence. Public shale companies can “walk and chew gum” with prices around $80 a barrel, IHS’s LeBlanc said, meaning they can keep growing production just modestly and still return significant amounts of cash to investors.

The restrained strategy for the public companies is working for them: Five of the 10 best-performing stocks in the S&P 500 this year are shale.

That newfound austerity means public oil companies in the U.S. now look like less of a risky investment, allowing them to attract the lowest bond yields they’ve ever seen. But because they’re using their cheap credit to retire debt instead of fuel new exploration, it will take until 2023 before the country’s total production will reach pre-Covid levels at current prices, three of the four major forecasters surveyed by Bloomberg said. Only Enverus forecasts the U.S. to be at its pre-pandemic high by December next year.

To be sure, shale oil production is notoriously difficult to predict: If prices march quickly upwards as has happened lately in natural gas, producers can respond with more wells within months. Rising costs to drill and complete in the shale patch due to supply-chain snarls and widespread inflation could also shift the equation. And if more public drillers buy out their private rivals, as was the case with Pioneer buying DoublePoint Energy LLC for $6.4 billion earlier this year, the new public owners might put a cap on activity. Egged on by investors eager to see more consolidation, there have been 159 deals in the U.S. oil and gas sector so far this year, according to data compiled by Bloomberg, more than in all of 2020.

But for now, private producers are finding open road with little pushback from OPEC or the majors to slow them down.

That’s music to Wheat’s ears. The former high school quarterback, who cut his teeth in the Barnett Shale after graduating college and named his company after the Spanish word for wheat, landed Trigo’s financing right at the nick of time. After cratering during the pandemic, West Texas Intermediate crude futures are up about 60% this year, making those brand-new wells highly profitable. West Texas Intermediate crude rose as much as 3.6% Monday to trade above $82 per barrel for the first time since October 2014.

“Capital was so hard to come across,” Wheat said. “We kept driving, kept moving forward, got fortunate and made a little bit of fate.”

Incentivized by higher oil prices, Saudi Arabia and the coalition of oil-producing countries are expected to get along with shale’s higher output, for now.

“The big assumption for next year is that as the shale growth continues, OPEC does want to keep the prices above $65,” Al Salazar, vice president of intelligence at Enverus, said in an interview. “We think OPEC+ will have to cut barrels in order to maintain prices in the high $60s sometime in the first half of next year.”