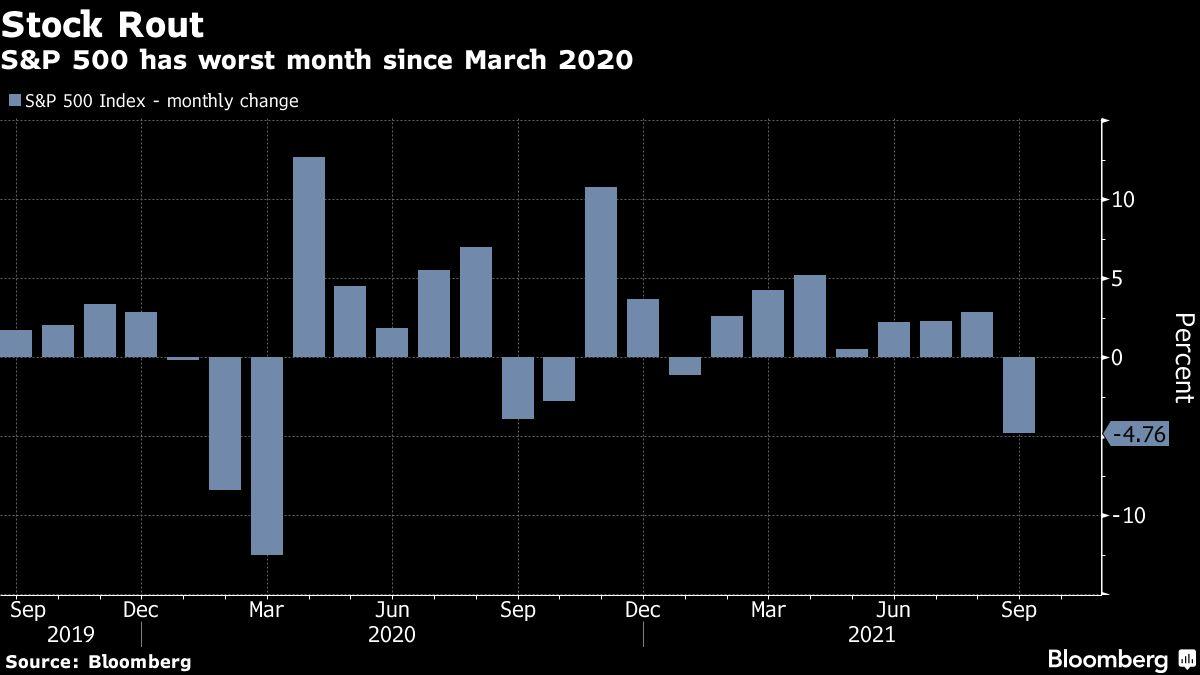 (Bloomberg) — Asian stocks and U.S. futures started October on the back foot, after overnight losses in the S&P 500 capped its biggest monthly selloff since March 2020.

Shares slumped in Japan and Australia, and a gauge of Asian stocks hit its lowest in more than a month. U.S. and Europe futures retreated. China began a week-long holiday and Hong Kong’s market was shut Friday. U.S. benchmarks fell Thursday even after confirmation that the House passed a nine-week spending bill to avert a U.S. government shutdown. The S&P 500 closed at the lowest level since July, extending its September losses to almost 5%. Economically sensitive companies like industrials and financials were among the worst performers.

Treasuries edged higher, with the 10-year yield dipping below 1.50%. The dollar added to gains for the week. Crude oil fluctuated after a tumultuous session during which China was said to order its top energy companies to secure energy supplies at all costs amid shortages, prompting the White House to reiterate its own concerns over rising prices.

As investors brace for the Federal Reserve to wind down its stimulus, fears are mounting about slowing economic growth, elevated inflation, supply-chain bottlenecks, a global energy crunch and regulatory risks emanating from China. A near-record technical streak for the U.S. equity benchmark has some bulls worried that a sharp pullback is overdue.

“A rocky start to the quarter is inherited from the wobble in U.S. equities amid a patchwork approach to avoiding a fiscal cliff conspiring with rising fears of inflationary shocks accentuated by the scramble for energy,” said Vishnu Varathan, head of economics and strategy at Mizuho Bank Ltd. “The threat is not merely interrupted growth/recovery but rather self-inflicted pain amplification between U.S. fiscal fumbles and China’s regulatory agitation.”

Political wrangling in Washington is threatening to push the U.S. into default and force President Joe Biden to scale back his spending agenda. House Speaker Nancy Pelosi was pressing ahead with a vote on a bipartisan infrastructure bill, even though progressive Democrats said they have the numbers to stall it until the Senate agrees on a more expansive tax and spending package.

“When we see a long calm stretch like we just did, and it finally ends, then investors kind of freak out,” said Jason Goepfert, president of Sundial Capital Research. “Nobody is used to the volatility, and newer investors — of which there are plenty right now — tend to panic a little bit.”

Elsewhere, China Evergrande Group started returning a small portion of the money owed to buyers of its investment products, weeks after people protested against missed payments.

Here are some events to watch this week:

Some of the main moves in markets: