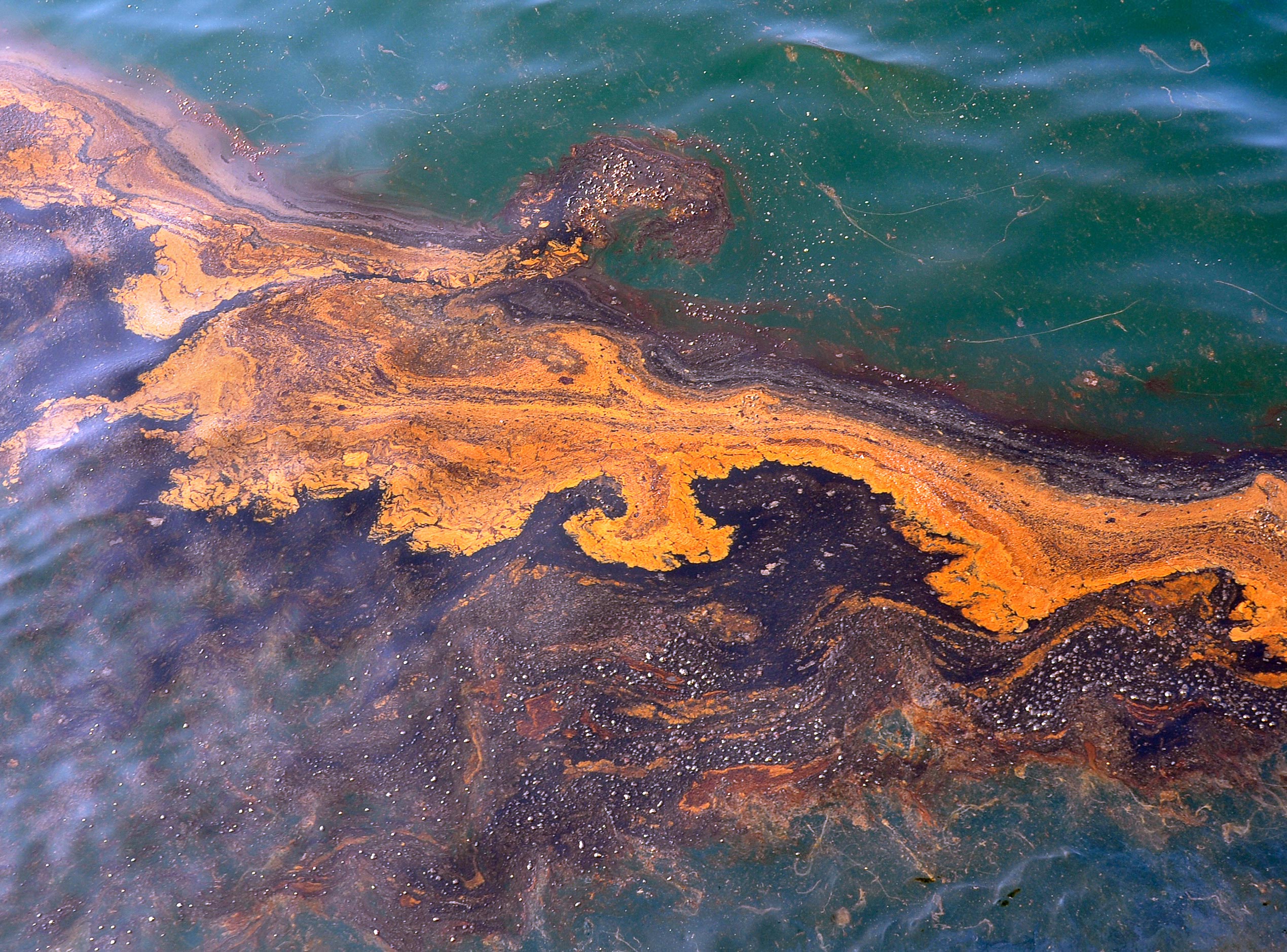 A thick layer of oil from the Gulf of Mexico that has been altered by sunlight after the 2010 Deepwater Horizon accident. A team of Woods Hole Oceanographic Institution researchers found that nearly 10 percent of the oil floating on the Gulf after the spill dissolved into the water by sunlight — a process called photo-dissolution. Credit: Photo by Cabell Davis III © Woods Hole Oceanographic Institution

Dissolving Oil In A Sunlit Sea

The 2010 Deepwater Horizon oil disaster was the worst marine oil spillage in American history. The Deepwater Horizon explosion, which resulted in the death of 11 people and the release of nearly 210,000,000 gallons of crude oil to the Gulf of Mexico, caused the tragedy. Scientists are still trying to figure out where all the oil went, 12 years later and hundreds of million dollars later. This concept is known as environmental fate.

There are three main outcomes of oil that is spilled at sea: biodegradation (microorganisms breaking down oil), evaporation, and oil stranding along shorelines.

A team of Woods Hole Oceanographic Institution (WHOI) researchers discovered that nearly 10 percent of the oil floating on the Gulf after the Deepwater Horizon disaster was dissolved into seawater by sunlight — a process called “photo-dissolution.” The findings were published today in the paper “Sunlight-driven dissolution is a major fate of oil at sea” in Science Advances.

“The amount of oil that was transformed by sunlight into compounds that dissolved in seawater during the 2010 Deepwater Horizon spill rivals that of commonly accepted oil fates, like biodegradation and stranding on shorelines,” said co-author Collin Ward, assistant scientist in WHOI’s Marine Chemistry and Geochemistry Department.

“One of the most fascinating aspects of this finding is that it might impact our understanding of where else the oil is going, and whether the result is good or bad,” said lead author Danielle Haas Freeman, Massachusetts Institute of Technology/WHOI Joint Program student. “If this sizable fraction of oil is being transformed by sunlight and is dissolving into seawater, that might mean that less oil is ending up in other places, like sensitive coastal ecosystems. On the other hand, we have to consider the impacts of the compounds on marine organisms before we can decide if the net result is positive or negative.”

“The process of oil photo-dissolution has actually been known for over fifty years,” said Ward. “But what’s new here is our understanding how this process varies with light wavelength, which we determined using the LED reactors. This is the key piece of information that allowed us to estimate the importance of this process during a spill.”

It was also possible to identify the most critical conditions for controlling this process by using novel measurements made with LEDs. The team put together scenarios for oil spillages with different thicknesses, times of year, locations around world, and types light. They discovered that certain changing conditions were more important than others.

“The importance of this process changes dramatically if you are looking at thin versus thick oil slicks,” said Freeman. “We also found, contrary to popular belief, that this process is relevant in Arctic waters, a particularly important finding given the expected increase in cargo ship traffic and heightened risk of spills in that region. This kind of modeling is critical when forecasting spills and considering the impacts on marine ecosystems.”

It is important to consider that ocean oil may have a new fate in order to plan for the future of oil spill response and oil spillage studies. These sun-produced compounds have a potential toxic fate. This poses a challenge when assessing the effects of oil spillage.  Ward and Freeman encourage researchers to explore these gaps in their knowledge.

“While our findings suggest that a substantial fraction of surface oil can dissolve into the ocean after sunlight exposure, a logical next step is to evaluate its persistence and potential harm to aquatic animals,” Ward said.