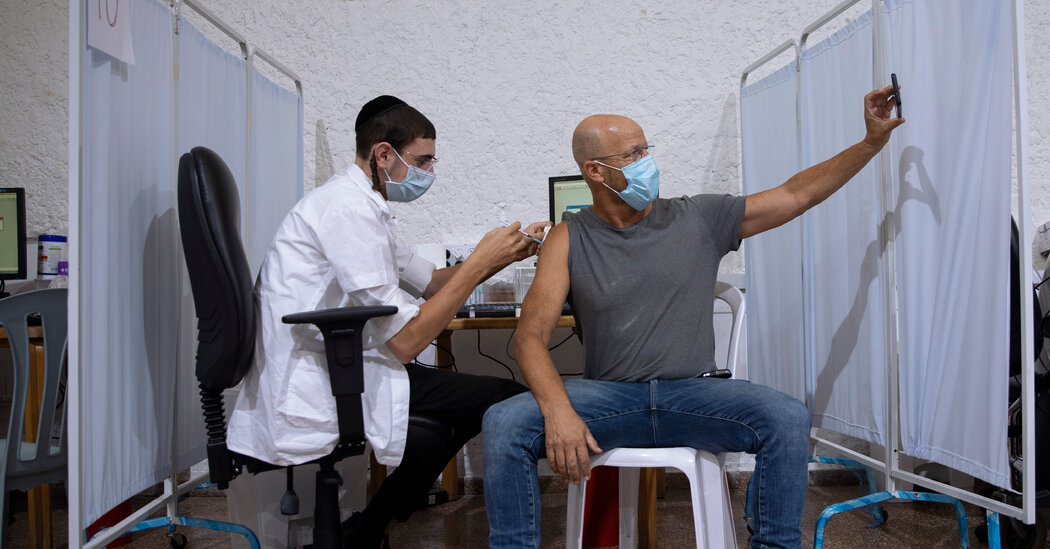 We’re covering Israel’s decision on a fourth Covid vaccine dose and the disappearance of an outspoken teacher in China.

Israel’s Health Ministry was weighing on Thursday whether to approve a fourth Covid vaccine dose to try to contain the fast-spreading Omicron variant after experts recommended it, saying they believed the country had to act.

Though there is not much scientific data, the pandemic response advisers concluded that the potential benefits outweighed the risks, pointing to signs of waning immunity a few months after the third shot and arguing that a delay in additional vaccine doses might prove too late to protect those most at risk.

If the Health Ministry approves the panel’s recommendation, Israel could start administering fourth doses as soon as Sunday for at-risk groups: those over age 60, the immuno-compromised and health care workers. The panel did not recommend a fourth dose for the general population. Top officials supported the move.

“The price will be higher if we don’t vaccinate,” Dr. Boaz Lev, the head of the advisory panel, said at a news conference late Wednesday. Describing the spread of Omicron as “a kind of tsunami or tornado,” he said, “We don’t have a lot of time to make decisions.”

Dissent: Some scientists say it’s premature. A few members of the panel raised concerns about a fading or exhausting of the immunological response in older people after multiple vaccinations within a short period of time.

Context: Israel was among the first countries to offer its residents a third shot, starting over the summer, and it would be well ahead of other nations in administering a fourth dose.

Here are the latest updates and maps of the pandemic.

Russia’s president, Vladimir Putin, delivered sharp criticism of the West on Thursday for rising military tensions in Eastern Europe, saying that Moscow was not to blame for talk of “war, war, war” because it was merely defending historically Russian territories.

He said at his annual year-end news conference that the Biden administration had agreed to hold talks on Moscow’s security concerns starting in January, calling it a positive sign, and he did not markedly escalate tensions. But he also said that Russia would expect quick answers on its demands.

“It was the United States who came with their missiles to the doorstep of our house,” he said, referring to NATO expansion, adding: “You are demanding guarantees from me, but it’s you who must give us guarantees. Immediately. Right now.”

Russian diplomats detailed their demands on Eastern Europe — including a written pledge from NATO not to expand east — in two ultimatums last week. The proposals suggested establishing a Cold War-style security arrangement in Europe based on spheres of influence.

Related: The Pentagon is working on a plan to provide Ukraine with battlefield intelligence that could help the country more quickly respond to a possible Russian invasion, U.S. senior officials said.

In China, an outspoken teacher disappears

Li Tiantian, who teaches at a rural school in Hunan Province, disappeared after telling friends that police officers had forced their way into her home and were taking her to a psychiatric hospital.

She told them the authorities had accused her of violating the bounds of officially acceptable comment on social media. In recent weeks, Li had publicly sympathized with a teacher in Shanghai who was fired for saying that there should be more rigorous study of China’s official death count for the Nanjing massacre, the Japanese army’s murder of residents of that city in 1937.

There has been an outpouring of public support for Li online. Unusually, the censors have not shut it down, possibly because central authorities see the case as a messy controversy best left to local authorities to clean up.

Sending government critics to psychiatric hospitals is a longstanding way of stifling and discrediting dissent. The authorities have stayed mostly mute about Li’s disappearance on Sunday, and they did not answer repeated phone calls from The New York Times.

Bros’, the only Michelin-starred restaurant in the southern Italian city of Lecce, became a global target for critics of pretentious cuisine after a negative review that derided its food and décor.

But the viral moment wasn’t all bad for the spot and its chef, our correspondent writes.

The Lives They Lived

Every year, The Times Magazine looks back on the legacies and lives of people who died that year.

There was DMX, whose “music seethed with aggression and the kind of pain Black men rarely get to air in public.” The author Beverly Cleary “created Ramona Quimby for other mischievous kids.” Norm Macdonald “became a comedian’s comedian by bucking the conventions of our confessional age.”

Read The Lives They Lived.

Separately, Joan Didion, who explored the fraying edges of postwar American life in articles, and became a tough, distinctive voice in American fiction, died on Thursday in Manhattan. She was 87. The critic Parul Sehgal called her “the grand diagnostician of American disorder.”