Severe Water Stress, Absolute Scarcity for 2 to 4 Billion Humans by 2025 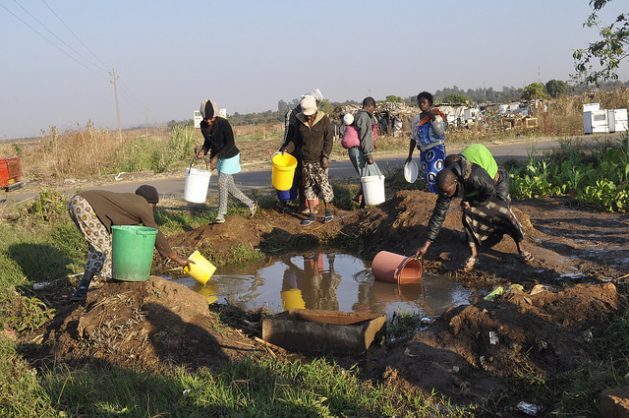 MADRID, Dec 23 (IPS) – Now it comes to the scary water crises, as it is estimated that, globally, over two billion people live in countries that experience high water stress.

On this, the UN Convention to Combat Desertification (UNCCD) also reports that ”other estimates are even more pessimistic, with up to four billion people – over half the population of the planet – already facing severe water stress for at least one month of the year while half a billion suffer from permanent water stress.”

This means that about 71% of the world’s irrigated area and 47% of major cities are to experience at least periodic water shortages. If this trend continues, the scarcity and associated water quality problems will lead to competition and conflicts among water users, it adds.

“Climate change will increase the odds of worsening drought and water scarcity in many parts of the world. Drought ranks among the most damaging of all natural hazards. While droughts affect every climate zone, drylands are particularly susceptible to drought and its impacts.”

Currently, most countries, regions and communities use reactive and crisis-driven approaches to manage drought risk. To address this issue, healthy land is a natural storage for fresh water. If it is degraded, it cannot perform that function. Managing land better and massively scaling up land rehabilitation are essential for building drought resilience and water security, explains UNCCD.

“Land restoration is the cheapest and most effective solution to improved water storage, mitigating impacts of drought and addressing biodiversity loss.”

Not enough rain? Too much rain?

Meanwhile, the UN Convention to Combat Desertification explains that communities all over the world have suffered some of the most brutal effects of drought and flooding this year.

“Flash floods in Western Europe, Eastern and Central Asia and Southern Africa. And catastrophic drought in Australia, southern Africa, southern Asia, much of Latin America, Western North America and Siberia are cases in point. The impacts extend well beyond the individual events.”

For example, the rise in food insecurity in the Southern African region and unprecedented wildfires in North America, Europe and Central Asia.

What is going on?

This is much more than bad weather in some cases, and is increasingly so, adds the UN Convention.

“Extreme events, including both droughts and floods are on the rise. With more land projected to get drier and more and more people living in drylands in the future, the discussions centred on the shift more than 60 countries are making from “reactive” response to droughts and floods to “proactive” planning and risk management designed to build resilience.”

For its part, the report The State of the World’s Land and Water Resources for Food and Agriculture warns that production systems where the land and water resources supporting agricultural production are constrained to a point where their capacity to meet current and future needs is seriously jeopardised.

Constraints may be further exacerbated by unsustainable agricultural practices, social and economic pressures and the impact of climate change.

Land and water resources are central to agriculture and rural development and are intrinsically linked to global challenges of food insecurity and poverty, climate change adaptation and mitigation, as well as degradation and depletion of natural resources that affect the livelihoods of millions of rural people across the world, according to the UN Food and Agriculture Organization (FAO)’s report.

Current projections cited in the report indicate that the world population will increase from 6.9 billion people today to 9.1 billion in 2050. In addition, economic progress, notably in the emerging countries, translates into increased demand for food and diversified diets.

World food demand will surge as a result, and it is projected that food production will increase by 70% in the world and by 100% in developing countries.

“Yet both land and water resources, the basis of our food production, are finite and already under heavy stress, and future agricultural production will need to be more productive and more sustainable at the same time.”

Increased competition for land and water

And there are warning signs. Rates of growth in agricultural production have been slowing, and are only half the 3 percent annual rate of growth seen in developing countries in the past, says the report.

In 2007 and 2008, any complacency was jolted by food price shocks, as grain prices soared. Since then, the growing competition for land and water is now thrown into stark relief as sovereign and commercial investors begin to acquire tracts of farmland in developing countries. Production of feedstock stability of land and water resources.

“Deeper structural problems have also become apparent in the natural resource base. Water scarcity is growing. Salinisation and pollution of water courses and bodies, and degradation of water-related ecosystems are rising.”

In many large rivers, only 5% of former water volumes remain in-stream, and some rivers such as the Huang He no longer reach the sea year-round.

Large lakes and inland seas have shrunk, and half the wetlands of Europe and North America no longer exist. Runoff from eroding soils is filling reservoirs, reducing hydropower and water supply, it explains.

Groundwater is being pumped intensively and aquifers are becoming increasingly polluted and salinised in some coastal areas.

Agriculture is now a major contributor to greenhouse gases, accounting for 13.5 percent of global greenhouse gas emissions (IPCC, 2007). At the same time, climate change brings an increase in risk and unpredictability for farmers – from warming and related aridity, from shifts in rainfall patterns, and from the growing incidence of extreme weather events.

“Poor farmers in low-income countries are the most vulnerable and the least able to adapt to these changes.”

The steady increase in inland aquaculture also contributes to the competition for land and water resources: the average annual per capita supply of food fish from aquaculture for human consumption has increased at an average rate of 6.6 percent per year between 1970 and 2008, leading to increasing demand in feed, water and land for the construction of fish ponds.

The deteriorating trends in the capacities of ecosystems to provide vital goods and services are already affecting the production potential of important food-producing zones, according to FAO.

“If these continue, impacts on food security will be greatest in developing countries, where both water and soil nutrients are least abundant.”

“On present trends, a series of major land and water systems and the food outputs they produce are at risk.